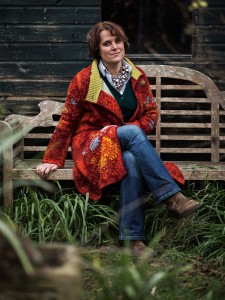 This month, Elena Bowes caught up with Vesna Goldsworthy to discuss her novel Gorsky.

Please describe what you do in 26 words.

Mother, wife, daughter, sister. Writer. Teacher. I wrote all this then realised that I had misread. The question is what I do not who I am.

I am curious about how the idea to model your first novel Gorsky on The Great Gatsby came to you? Did you have the story in your head and were searching for a classic or the other way around? Divine inspiration – where did it come from?

I wanted to write about Russians in London. Certain images had lingered in my mind for years, street scenes, party scenes, surreal moments I glimpsed in my so-called ‘real life’ in London. I thought I’d free myself by using Gatsby as writers had used the Greek myths throughout history, as a kind of loom for my own carpet. Gatsby is such a powerful literary archetype. It almost hadn’t occurred to me before I began that it is a relatively recent novel written by a twenty-something. Genius always seems timeless and ageless.

You have been quoted as saying “If you need to look for ideas, you might be approaching the business of writing the wrong way. I am a great believer in encouraging people not to write.” Can you please expand on this?

I was being asked to advise young writers on where to look for ideas when I said that. This may be romantic, but I don’t believe in “looking for ideas”. It sounds wrong, as though you feel you must write at any cost. There are so many better things to do with your life. And there are so many books already: better to read those than to write more books if you don’t have to. I teach writing, so it sounds counterintuitive to be telling people not to write, but I prefer to teach those who are bursting with ideas and don’t know what to do with them, than those who need my advice on looking for ideas.

You were also quoted to have said that “strong plots, compelling themes and interesting settings are more important than some teachers of creative writing like to admit.” Can you please expand on this?

Ha. Creative writing classes often focus on voice, point of view, etc. because it is manageable in an hour or two, in the workshop, to look at a small segment of text. And those things are very useful – it’s hardly a waste of time. Plotting is really difficult. Keeping a cast of dozens under your control as they move about, as Tolstoy did, demands months and years of repeated effort, trial and error, and – if possible – a wife like Sofia Tolstoy to copy your drafts seven, eight times over. This skill is harder to teach in many ways than details of technique, hardest of all to achieve yourself. I work on elements of plotting with my PhDs, one to one. I can see where they are going wrong, and I can tell them how to get it right, but that does not mean they will be able to do what I tell them successfully. It’s like explaining how to do a cartwheel or a pirouette. That is true of myself too. I know what I should do, but sometimes I just can’t pull the thing off and I despair. Sometimes I find an alternative route, sometimes I give up. It’s easy for me to give up; no one expects anything of me, most of the time no one knows what I am up to. I am not a PhD. I just start quietly on another thing.

How did you research your main character Gorsky. He lives in such a private, rarefied world. Or are most of the realistic details imagined?

I know people who know people and I like reading glossy magazines (laughs). Some of the most unlikely details in Gorsky are true to life, but a lot of it is pure fiction woven from bits of unusual things I’ve heard about: a magpie’s nest. Being an East European immigrant in London lends certain oddity to one’s networks of friends, takes one out of usual professional silos. My friend’s son was playing for a while in one of London’s football teams: how many women academics get to go to big-time football matches in loco parentis?

I wonder if any Chelsea oligarchs wrote to you about Gorsky – and if so, what they said?

No, they haven’t. And I hope they are not reading your interview and getting ideas.

How is your current project based loosely on Anna Karenina coming along? Can you tell us a bit about that novel in the making?

It’s been delivered and it is coming out on 8 February 2018, with Chatto, as usual. It’s called Monsieur Ka. “Based loosely” is not right, but neither is it entirely wrong. This is not another Gorsky. It is set in 1947, in London, and it weaves together two stories: one of a young French woman recently married to an English army officer and living in Earl’s Court, and one of an old Russian émigré living in Bedford Park. He is the titular Monsieur Ka and my link to Anna Karenina.

How did the writing process for Monsieur Ka go – were you in a state of possession as with Gorsky and your memoir Chernobyl Strawberries?

It started with a clear, almost architectural plan so I was going about it in a fairly calm and calculated way (laughs). But there was a moment – and I can’t say more without spoiling it – when I wanted to make a character do something that went very much against the grain of his personality as I had established it hitherto. As I retraced my steps and nudged him along to do this unexpected thing, I sort of fell in love with him, and then the possession overtook me. I hated having to get dressed in the morning and leave the house in order to go to work because I just wanted to be in that world.

Author Hanif Kareishi once advised you to “move towards your fear” in writing. You’ve tackled different writing forms – literary criticism, poetry, prose – and now you’ve taken on a different subject matter: London in 1947. How would you compare those two fears? And what fear would you like to face next?

Hanif gave this advice to creative writing students at Kingston University, where I used to teach with him before I moved to UEA. It is a good piece of advice but I like to escape myself just as often as I like to burrow deeper into my fears, so I don’t always follow it. I would now like to write about London in the 1980s: the dog days of the Cold War, the time I arrived in England. I don’t have the story yet. It’s still at that stage when it’s just an excuse to feel pleasantly nostalgic about the Iron Curtain (laughs).

In your notes at the end of Gorsky you say that Fynch’s bookshop is imagined although you wish it did exist. What are some of your favourite London bookshops?

Hatchards; John Sandoe; LRB Bookshop; Daunt on Marylebone High Street; the Open Book in Richmond; my local Waterstones in Chiswick; Foyles; Persephone on Lamb’s Conduit Street. I am the patron saint of London bookshops (laughs). You promised that the last question would be easy, Elena. It’s the most difficult one.

Get your copy of Gorsky here.