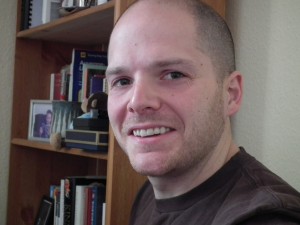 Can you explain what you do in 26 words?

I teach and write about literature at Bristol University, where I work mostly with mature students who are returning to education. I’ve just written a book.

Your first book, Romeo & Juliet in Palestine: Teaching Under Occupation, about your semester teaching English at Al-Quds University in the Occupied West Bank is quite different than your previous writings on Doris Lessing, George Eliot and the Fulham FC. How did your memoir come about?

I’ve written a mixture of academic articles and journalism in the past. This book ended up bringing those two kinds of writing together. At first, I’d thought it would be a book of essays, and only when the publisher called it a memoir did I accept that was the right word for it! It’s a very personal book and it became very important to me to write it as I was writing it. To begin with, I wondered if it would work as a book at all.

And what challenges did you face when it came to writing?

The biggest challenge was that it also involved writing a lot about other people’s lives: my students, colleagues and friends in Palestine, and my grandparents, who were refugees from Austria in the 1930s and lifelong Zionists. So there was a challenge about how to write about other people while acknowledging what I couldn’t know about their lives.

What did you learn about Shakespeare during your time at Al-Quds University?

I had been teaching literature for 10 years when I went to Palestine. I still understood in an abstract way that Shakespeare was a ‘great’ writer. But seeing the works we read – Romeo and Juliet, Hamlet and Julius Caesar – come to life as my students in Palestine encountered them was wonderful. There is a Palestinian director called Amir Nizar Zuabi who I quote in the book and who says that Shakespeare ‘lived in dangerous times, and made the most of them in his work’. Well, my Palestinian students live in dangerous times too and I think, through that, they taught me to see Shakespeare differently. I learned to look at the plays again. I also learned to look again at the political context in each play: the danger that the lovers live with in Romeo and Juliet, the lack of a trusted form of political authority in Julius Caesar, the dangerous state that Hamlet lives in.

How did your ideas about literature and teaching change during your time in Palestine?

I went to Al-Quds very unsure whether I could be useful there or what I had to offer as a teacher. There were lots of things I witnessed in the West Bank that were disturbing or distressing and I did not leave feeling optimistic about the situation there. But I did feel optimistic, in a small way, about teaching and about what could happen in the classroom, because of the ways my students had found to talk to me about their situation across the divides of our experience. I did a reading from the book at Kingston University last week and a member of the audience asked me: ‘Is your book about love?’ She was referring to Romeo and Juliet in the title, but also to teaching. It’s made me think about something Paulo Freire talks about in Pedagogy of the Oppressed. He says that dialogue is an ‘existential necessity’ but that it cannot exist without love – and that love is, in that sense, ‘commitment to others’. I think that sense of dialogue was at the heart of the best classes I had at Al-Quds.

What would you say are the main differences and similarities between your students in the West Bank and Western ones?

The students themselves are probably too diverse and different from one another to generalise about either the West Bank or the West. I think one thing that was helpful for me is that I am used to teaching in adult education, and thus to encountering students aged anything from 18 to late 80s, and who may have very diverse backgrounds. That makes the classroom a beautifully unpredictable place, and it can also make a student’s life experience central in what he or she is studying. That was a useful preparation for a context where my students’ lives were, in some ways, very different from mine and where that context of occupation was so present – overdetermining, even – that we had to find a way to acknowledge and work with it in the classroom.

Which books influenced your writing, or had a profound affect on you?

There were two books that influenced me very directly when I was writing this book. One was John Berger’s A Fortunate Man, which I re-read several times because I was so taken with its style and with how he writes about people’s lives (especially at the start). The other was a book my friend Neil Hertz sent me. He had also been teaching at Al-Quds when I was there and he read a draft of my book and then sent me James Herndon’s The Way it Spozed to Be, which is a wonderful account of teaching in an American high school in the 1960s. That was an incredibly useful model for me, and a typically generous act on Neil’s part. The book that has probably influenced me most decisively is Virginia Woolf’s Mrs Dalloway, which I read when I was 17 and which convinced me to study literature at university. It seems to explain everything at that point in my life!

What advice would you give your 17-old-self?

Enjoy your curly hair while it lasts! Worry less. And be sure to read Mrs Dalloway.

I’ve been doing some academic writing on Doris Lessing. I’ve just finished an article about her novel Mara and Dann, looking at how the main character is taught in the novel, which is set in Africa after a future ice age. I’m also working on a new book project, which is only just taking shape – but which will be a similar ‘chatty’ book, about how literature can be used in unusual settings.