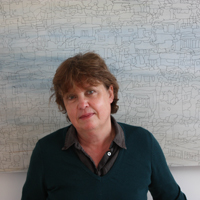 Sue Evans is a freelance design writer who has interviewed many of the great copywriters for D&AD. And, did they have anything in common? Many had been fired from previous jobs. She also talks to Elen Lewis about her passion for creative archives and being touched by the power of sound.

I’m a freelance writer working mainly in design. I write from home and I’ve never quite got the hang of separating the day job from domestic duties. It’s certainly not nine to five. My daughter is about to go away to university so I imagine I’ll organise my time differently when she does.

I’m interested in creative industry archives, I guess because so much of design and advertising relates to our daily lives over the years. I worked on the D&AD Copy Book update and had to find original ads for some of the copywriters featured, as scans from the previous edition wouldn’t be good enough. I became obsessed by this quest, refusing to be daunted by how much material had apparently been lost. “We deal in ephemera,” someone told me. With the help of the History of Advertising Trust, I tracked down an ad for Amnesty International written by Indra Sinha and his copy still resonates. We shouldn’t lose this stuff.

You’ve interviewed many copywriters for D&AD. What has been your favourite piece of advice on good writing?

Tony Brignull was clear that thorough research was important for his writing. It certainly shows in his work at CDP for the Parker Pen Company, Birdseye and Barclays Bank among other campaigns. He held great store in asking clients difficult questions: Who are you? What do you stand for? Do you have any principles? He would visit their factories and offices. He told me he once got so frustrated by no one being able to tell him why the engine of a Fiat car sounded the way it did, he decided to fly to Italy to talk to the man who designed the exhaust system. Trouble was the airport became fogged in and he had forgotten to take any money with him. He somehow made his way back by train in company with the Romanian fencing team who let him share their supper.

And, did the greats have anything in common?

Quite a number had been fired from previous jobs, sometimes on a serial basis. A couple of the advertising greats started out working in the agency mailroom. I noted an obvious enthusiasm for copywriter and art director pairings, on the basis that two heads are better than one.

And, what can we learn from the great creatives?

Be tenacious, don’t give up and make everything you do count, no matter how ordinary the requirement might be, come up with something extraordinary.

Your Storyworks piece is focused on sound. How does sound recording change writing practice?

For me, it makes my writing more grounded in factual stories, what was said rather than what I thought was said. It’s tempting to follow one’s own train of thought and sometimes that can add noise to what should otherwise be a straightforward retelling. For example, I write articles, case studies and so forth where it’s necessary for me to include information that I get from interviews. There’s also the chance that what you record could stand alone in its own right, published as a sound recording or podcast on a website or blog. The interviews I’ve done with past D&AD presidents came about because of a recording I did of an interview with Mike Dempsey that I mention in the piece.

Describe the power of sound in 26 words?

“In… the recorded voice we hear what was (and, inserted into our real and present time, still is) the thing itself. We are touched by it.”

Not my words but Mel Gooding’s in the introduction to ‘Speaking of Art, Four decades of art in conversation’ by William Furlong, published by Phaidon in 2010.

What is the hardest thing you have ever done?

I suppose going off on my own to work as a designer in Spain when very young. I trained as a textile designer and was offered a job designing wallpaper and carpets in Valencia when I finished my studies at college in Stockport. I had hardly been outside the north of England before and couldn’t speak Spanish. Somehow things worked out. Then over time I gave up the gouache to write instead.

What advice would you offer on using sound as a writer?

Invest in a digital audio recorder with broadcast sound quality at least good enough for web. There are a number on the market. I bought mine off eBay about five years ago. Check the sound levels and whether the ‘record’ button is properly switched on. It sounds obvious but it’s easy to get sidetracked. And then see where the conversation leads you.

I’m writing a series of short commentaries on aspects of D&AD’s online awards archive and a website for a design company. I’m also writing design guidelines for a street signing project for a city overseas, which is quite technical but involves issues around readability, accessibility and conveying a sense of local identity, which appeal to me. There is pro bono work including ‘Tell the Truth’, a collaboration between Designer Breakfasts and members of 26 to be published as an ebook, and a Dark Angels poetic relay coming to a building site in north London.

For someone who likes working in sound, I sometimes get tongue-tied. Luckily, I know which words I stumble over and can usually avoid them.