The Ape Has Stabbed Me is Vincent Poklewski Koziell’s witty, colourful memoir – recounting Koziell’s life in pre-war Poland, and his arrival as a refugee in the UK. This month, Elena Bowes caught up with his daughter, Sophie Poklewski Koziell , who helped bring these eccentric stories to life. 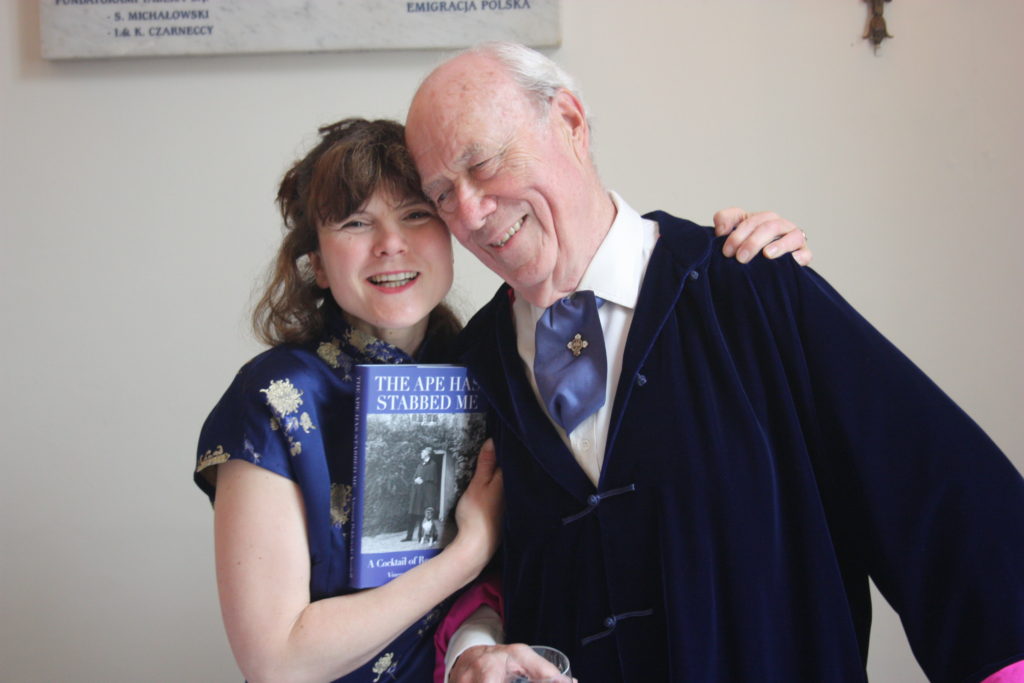 You helped your father write his memoir The Ape Has Stabbed Me. How did the idea of the book come about? And what was it like helping your eccentric serial entrepreneur father write it?

My brother’s girlfriend, Charlotte Wilkins, had instigated the book with my father. However, shortly afterwards they were unable to continue and the book lay dormant for a quite a while. I have a writing and editing background, so my father asked me if I wanted to continue. A former colleague had just set up a publishing agency, The Write Factor, so I immediately got her on board to help produce the book.

Working with others has always given me the best and closest relationships. It was just the same when working with my father. Our relationship blossomed through the medium of the book, and the fire and brimstone of creating it. It was definitely a ‘coming out’ period for me as a daughter, and led to a more honest and easier rapport with him. He recently passed away and I am totally at peace with his life and death due to the extraordinary time we had together making ‘The Ape’.

If you had to describe him in 26 words what would they be?

An adventurer and well-honed raconteur with a great sense of the ridiculous. A hedonist who carried with him a deep compassion and kindness for the underdog.

Did you have to conduct a lot of research or did you rely on your father recounting tales?

The research was mostly listening to my father, and probing him; piecing his life together. We would go for long walks, and I’d let him range freely in his mind, but would take mental notes. Later I’d ask him to write small sections – depending on his mood and ability to write – and then I sewed them all together.

Your father taught you as a little girl to say, “Excuse me, Daddy” every time he made ‘an unsociable noise’ be it ‘a frontal or rear escape of wind’. Was life with him full of practical jokes?

Yes, he was full of practical jokes but they were mostly slapstick and almost schoolboy silly – so I didn’t always find them funny per se. However, it was the fact that he was in his eighties and still larking about and finding himself funny that made me laugh (and sometimes despair)

One of his strengths was the fact that he was consistent. He was fully himself with everyone and never changed for his audience. He would share a drink, or a laugh, with anyone who was willing, and was loved by everyone – from doorman to duchess.

One of his great weaknesses was his need to shop daily for what we call in our family ‘buggerettes’ – anything from a cheap torch, to a set of combs (despite his baldness). Thus much of our ‘work time’ was spent browsing low-quality shops such as Poundland. He would be mesmerized – almost drooling – and would exit triumphantly with a set of spanners (which he’d never use as he never did any DIY), or double-sided sticky tape. He bought a new torch on every trip to Cornwall – I have no idea what he did with them when he got home, because he always seemed to need one…

I loved the story of your father, then working as a butcher in Harlem, addressing a giant thug who was ‘helping himself to a large Porterhouse steak and stuffing it into his breast pocket’. I spend a lot of time in New York City now so the idea of him tapping the burly thief politely on the shoulder and saying, “Excuse me sir, but I believe you have property of the Great Atlantic & Pacific Tea Stores concealed about your person, unpaid for” brave, foolish and hilarious. Which is your favourite tale?

My favourite story is about Mrs Revington in West Cork, (p146), it absolutely sums up Ireland and Irish humour and makes me grin every time.

Picanniny Belong Big Masta? I also love your chapter titles. Which is your favourite and why?

Skellingtons in the Closet because it reminds me of all the family lingo we share – picked up from malapropisms and childhood mispronunciations. It is these little words, for instance an Irish friend who said ‘skellington’ instead of ‘skeleton’, that give me a great sense of secret family belonging.

What was the biggest challenge in writing this book? I’m wondering if it’s which stories to include and which to axe?

The biggest challenge was definitely the effort needed to squeeze some work out of my father. He was a great work avoider, and would do almost anything not to sit down and get on with writing. I had to manage him, and his schedule, more tightly than that of a toddler. First his breakfast, then his bath, then his walk, then a drink, then lunch – that would be the morning gone. And if I wasn’t careful the afternoon would consist of a shopping trip and a snooze, and the day would be over. It was especially complex as I have three children, so I had to juggle their timetables and school runs to free up some stretches of time with Vincent. He’d then wriggle like anything to get out of lifting a pen. So I had to learn many tricks, as well as being quite bloody minded!
I laughed aloud a lot while reading The Ape Has Stabbed Me. How easy was it to transfer humourous memories to the written word?

Surprisingly easy really, as Vincent seemed to be able to write the way he spoke. However, it didn’t translate well the other way round – recording him telling stories didn’t work in prose.

I insisted that he wrote every word, and never edited his style. I loved the rhythm of his writing, and was careful to preserve his essence. There was a piece of me that felt uncomfortable around the ‘non-political correctness’ of his viewpoint – for instance, his view of women. However, I felt it would be dishonest and inauthentic to censor his style or content. If readers felt that it was distasteful, then they could put it down. But essentially Vincent’s thoughts and experiences were those of a man of his time. That was his truth and reality. And I stood by that.

What advice would you give to wannabe memoir writers?

Be yourself – don’t hide a morsel away. Get it all down in all its rawness, then edit later. Reveal yourself with all your warts and magnificence. Ultimately everyone is fascinating, as human nature is intriguing. Readers appreciate authenticity and diversity. They can detect fraud and fantasy. Don’t be afraid to share the flops and failures too!

Do you plan on writing another book, and if so what would it be about?

Yes, with a wonderful woman called Beata Aleksandrowicz who has a fascinating and powerful tale. Her life story and work is extraordinary. Currently looking for a publisher!