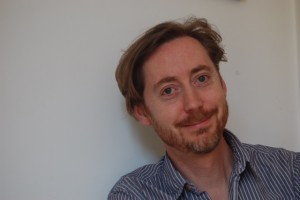 Randall is a novel about art, money, love and friendship (aren’t they all?) – and the sheer bliss of being alive in London in the 90s.

Where did the idea for your novel come from?

I’d written a short story a long time ago about two men who lived in a flat together. They were friends and one of them was in awe of the other. So that germ of an idea about what it’s like to be friends with someone who you think is a genius started there.

So the joke of Randall was that, if you look at the Young British Artists and people like Jeff Koons, what could be discovered after someone’s death that could possibly shock anybody? So I played with that idea with the strand of the book about these paintings that are found after Randall’s death.

When did you write the book?

I wrote it when I was doing an MA and then a PhD degree in Creative Writing in East Anglia in 2009/10.

Yes, that was the funny thing, I realised that although I was writing about a period of my life that felt like it was only ten years ago, I was actually writing a historical novel. I had to research it. The early 90’s was a hazy memory. I had to find old copies of fashion magazines, work out where people were hanging out and what was cool.

When you mapped out the book, did you know how the plot would develop?

No. Although I knew that all the way through the book would be the emotional question of whether they’d get back. The best way to make that credible for the reader was for me not to know the answer either.

I remember the story of Casablanca with Humphrey Bogart. Ingrid Bergman wasn’t told which of the characters she would end up with. When I’m writing something I try to keep myself in a position of suspended innocence or ignorance as to what’s going to happen in the end.

So you’re almost watching the plot develop, the way we, the readers, are?

You have to fool yourself to be in that position, turn it into a fertile ignorance and that way you’ll write things more fluidly and more interestingly. Once it’s all done then you can go back and improve everything, but for the first draft it’s always nice to have some unknown quantities ahead of you.

Any other tips for 26ers who are also aspiring novelists?

I wrote this while I was attending a course, but I was also working as a journalist at the same time. It took me a few good years to write it. But I didn’t sit down with an empty diary and say I’m going to write a book. It was always

squeezed around family life, work life and lots of other things. I never got writer’s block because I was always thinking about the characters when I was doing the washing up or when I was walking to the shops, when I was stuck on the tube. So I think the biggest tip I have for someone writing is that the sitting down at the computer is an essential part of it, but it’s not the only part of it.

If you can keep yourself entertained with daydreams about characters and scenes and what-ifs and acting out possible situations in your head, then when sit down at the computer, you’ll know what you’re going to write. Secondly, if you’ve entertained yourself then you’ve got a better chance of entertaining the reader as well.

What are you working on at the moment?

I have a book planned, which is not really a sequel. It’s treating the music industry in the same way that Randall treated the art world and the financial world. This one is about the music industry over the last 20-30 years. It’s got similar ideas of characters and what happens to an artist’s legacy after they’re dead.

Will there be romance or a back story?

world and trying to work out what’s going on. But I know that you can’t do that for 80,000 words without some characters who feel alive as well. If you’re not living in wartime then romance is the best way of putting your characters at risk on the edge and on the line.

Who or what inspires your work?

I’m not sure I think of it as being inspired really. I love reading and I love thinking about the world, and writing is just an extension of all the reading and thinking that I do. I enjoy sitting at the computer and I also enjoy the finished product going out and being read by people. So if anything inspires me it’s an empty page and the idea of someone in the end reading it.