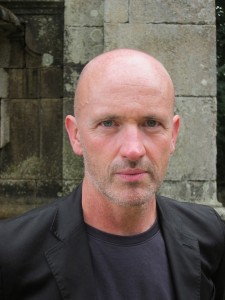 Elena Bowes talks to author Adam Baron about his latest book, Blackheath. Known for his crime novels, Baron explores a new genre with Blackheath, a comic modern day novel about life after children and the stresses and strains of equal parenting. It will be released on Amazon February 18th, but is available on Kindle now. 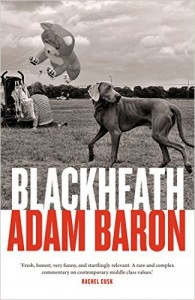 Blackheath is a departure from your crime novels. How did the idea of this book come about?

The actual germ of it was that I just saw the picture in my mind of a woman sitting at a table and not feeling what she should feel for her daughter, and that was it. I just started to investigate this woman’s thoughts. The mother took her daughter to school and I followed her. And then she met this guy and I followed them home again. It felt like being a voyeur.

Your plot is fast moving and gripping. What advice would you give writers on structuring plot?

Read loads of books because I didn’t do it on purpose. I didn’t think it up. So read lots of really good books and maybe it’ll become hardwired in to you and try and move your characters on, try and make them do things that surprise you and surprise them.

So how much of your plot do you already know before you start writing?

Nothing at all, and then as you begin to write you get moments, moments begin to appear in your head and you think, ‘Wow, if I can get the reader to that moment and they don’t know that moment is going to happen that would be really powerful.” You don’t really want to try and think too much in the future because it deadens it. You get these pictures of moments. The construction of the book is to move towards those moments and build upon those moments, all of which are adding more stress if you like, and potential to the characters.

What’s one of your favourite books in terms of plot, where you were constantly surprised?

Anna Karenina. I’m reading it again at the moment and there’s a crucial event that is just before Vronsky goes to the races which I won’t tell you, but it’s just an astonishing, astonishing knife in the heart of the book that Tolstoy does there. And the way he moves from point of view – so you’re in St Petersburg which is this rich urban setting and then suddenly you’re hunting out in the Russian countryside. The use of tonal shifts and the movement of point of view is the model plot.

Sex, there’s a lot of it in Blackheath, it’s never cloying. Do you have any advice on writing about sex?

Do it naturally but then prepare to be edited and that’s the place where I would accept the most editing of any part of my fiction.

Because it’s the one area of writing where you really don’t know as compared to the rest of your writing, how it’s going to be perceived from the outside. I am not at all nervous about sex. I am not embarrassed by sex, talking about sex. I’m not one of those English guys whose all, you know, neurotic about sex. I think my sex scenes are explicit, but I haven’t minded in the editing process with my editor, drawing back slightly.

What does your wife think of Blackheath?

But you did do stand up comedy like James in Blackheath, you do live in Greenwich where your novel is set …

Do you find it hard to write from the point of view of a female character?

What advice would you give your 17-year-old self?

Don’t be so shy. Don’t be so embarrassed by yourself, by the world. Go up and talk to that person, talk to that girl, talk to the guy. Go ask that person for help. Hey, can I come work in your company. Would you like to go for a cup of tea? I lived within my own studious dark shell for a long time. I still do.

My children have finally bugged me into writing a book for them. So I’m working on something so I can shut them up.

Yeah, well I don’t know if it’s a children’s book exclusively. I’m hoping it isn’t. I’m hoping adults will get a lot out of it. But my ten-year-old is now big enough to hurt me, and they’ve been at me. ‘Daddy, you’re a writer, write a book, write a book.’ So I had an idea. Again I had no idea what was going to happen. I’m halfway through it. I’m enjoying it.

Play tennis with my kids, it’s all children now. They’re 10, 7, and 5 and they are the funnest people to be around. My wife and I cook. I love to cook. And my secret vice is wines of the Rhone Valley which I love too much and can’t afford.