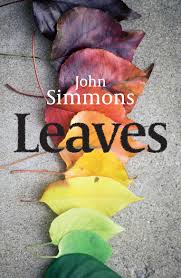 John Simmons, co-founder of 26 has written a novel, Leaves. John talks to Elen Lewis about returning to the manuscript he first penned in the early 1970s, the joys of writing fiction, and the power of perspective and persistence.

Summarise the plot of your novel in 26 words

North London street, 1970. A child’s murder hastens the community’s decay. The seasons revolve but will a new year bring renewal to the street’s departing residents?

Do you have a writing routine?

I like writing in different places. Even though I’ve got three different rooms at home as ‘writing spaces’ I like to go out to write too – in coffee shops, museums, libraries. Often I find the hum of life around me is needed to concentrate properly on the writing in hand.

How do you fit writing fiction around writing for business?

I’m not sure I could do one without the other. I wrote the first draft of Leaves during my first year of working life. I used to surreptitiously scribble sentences on pieces of paper while pretending to work – this no doubt explains why my early career was not a meteoric rise to the top.

Eventually I set aside Friday evenings – after dinner till early hours – for ‘proper writing’. I’ve kept that habit for forty years, so I guess that’s the one immutable writing routine I have.

What’s your next novel about?

It’s going to have the Spanish Civil War and Second World War as the backdrop. I draw on a bit of family history there. A story came to me when I was in Seville last autumn before a Dark Angels course. I woke with this story forming in my head, including the first sentence, then I carried on writing in gardens and cafes as I walked around Seville all day. I finished it and read it out on the course. It suggested itself to me as the prologue for a novel with a woman as the central figure. I’ve written about 14,000 words so far and I’m really enjoying the writing and the research. In fact I’ve planned my summer holiday in the Basque country around the research.

How is your publisher changing the way publishing operates?

Matthew Smith set up Urbane a year or so ago. He’d worked in big mainstream publishers but became frustrated with the false relationship and expectations – only the big-name authors get proper attention from publishers, reviewers, the literary world. So he wanted Urbane to be based on collaborative principles between authors, publisher, designers and communities of readers. He thinks of Urbane as the third way, combining the benefits of traditional publishing with greater creative engagement of authors in all aspects of the process. This extends to a fairer commercial relationship, sharing the revenue. After my experiences with a number of conventional publishers, I’ve enjoyed working with Matthew and Urbane. Of course, I accept that the system means my book is unlikely to head to the bestselling charts (Urbane does not yet have the commercial clout of a Random House) – but that applies to hundreds of thousands of books from traditional publishers anyway.

What advice would you offer to other 26ers wanting to publish a novel?

I suspect there are more writers and fewer publishers than there used to be, but it has never been easy. So now you have to be creative in thinking about ways to publish a novel – you have to be more proactive because not even an agent is a guarantee of publication at the moment. There are more options – crowd sourcing like Unbound, new models like Urbane, self-publishing including ebooks. Novels can still be published but don’t go into it with the thought that this will be your fortune. I actually think it’s healthy for a writer to have a broad range of writing experiences, including business writing for clients. Those clients are another kind of reader from whom you can learn. All writing experience is useful.

You wrote this novel in your 20s and then it languished in a top drawer for many years…what made you dig it out again?

When I wrote the first draft, in the early 1970s, it came close to being published. But I felt I was in danger of becoming bitter from repeated rejection. I kept on writing without being so obsessive about the goal of being published. I would find another way of being a ‘writer’.

The passing of time lends a wonderful perspective. When I left Interbrand to go independent in 2003, it was partly with the thought of getting back to fiction. So I dug out the manuscript of Leaves and thought it was surprisingly good. The most surprising – but obvious – thing was that it had become a historical novel that was completely authentic in its period details (for obvious reasons that don’t usually apply. I could also see where it could be improved. The main change was to add in a character as the observer/narrator looking back on the events of decades earlier. This fitted with the changes brought about in me by time, perhaps creating a combination of youth and experience. Anyway it certainly helped me rewrite it from the perspective of now.

Why must we all ‘only persist’?

Ha, I wrote that in my blog because my favourite quotation is EM Forster’s ‘Only connect’. Persistence is a necessity but I still think connection is the absolute essential. Strangely enough, as you get older and persist more, the connections seem to happen more frequently and more naturally. I sometimes say I’m pursued by serendipity. But the publication of Leaves is a good story of persistence rewarded.

If Leaves had been published when you were in your 20s, would you be writing for business today?

Tricky to say. I suspect my novel-writing career would have fizzled out, dampened by lack of commercial success. So I would have had to earn a living, and I would probably have found my way to applying writing skills in the business world. I have to say I’ve never felt hard done by or repressed by ‘writing for business’ – I’m proud of what I do in that field. It has its own intellectual challenges, it involves creative collaboration (particularly with designers) and many of my clients became and remain great friends. I’d have missed all that if my career had gone differently.

What do you find hardest about writing fiction?

The hard thing is to find the structure for a novel. The structure of Leaves is based around the seasons and that creates the narrative movement. Once you have that, everything else becomes much easier. I think that was the big thing I learnt from the Dark Angels collective novel Keeping Mum (published by Unbound) where I created the structure and mapped out the story in some detail. Fortunately the other fourteen writers (including yourself) went along with it, and it worked, somewhat miraculously. The need for that kind of discipline is probably more obvious if you’re trying to write a novel with many different writers – but the need is actually just as strong when you’re writing a solo work of fiction. You have to be very organised, herding all these words and stories and characters into a coherent form, a bit like an enormous version of those puzzles when you constantly shift the tiles around in a frame.

Do you carefully plot everything out before you start?

It follows from the previous answer that I should do this, but of course there’s always flexibility. It’s your story so you can change it. More to the point, the characters you create always change it. Though I might start with plot, it’s the characters that I love about fiction. I love the way they grow inside your head, become real people with real emotions – and, of course, they do things that enrich your plot. So plot carefully, create a plan, but always be prepared to change the plan in response to what happens as you write. That for me is the great joy of writing – you never know what’s going to emerge from your own head, and that’s true of fiction and business writing.

You can order your copy of Leaves here.

A special offer to buy Leaves for £7.00 and free p&p for 26 Members (normal price £8.99 plus p&p). Use this link http://urbanepublications.com/books/leaves/, put 26Leaves in the coupon space and it takes £1.99 off the checkout price.