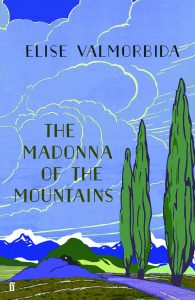 The Madonna of the Mountains is the compelling, detail-rich life story of Maria Vittoria. The novel opens in 1923 when Maria’s father has gone searching neighboring villages to find a husband for his daughter who at 25 is practically a spinster. Elise Valmorbida’s tale spans nearly three decades, transporting the reader back in time to a distant world where an ordinary, hardworking, devout woman makes do with what she has been given: a quick-to-anger husband, five children and the troubles that come with Mussolini’s fascist reign and world war. She battles fear, hunger, betrayal and guilt as she tries to keep her family together during these war-torn years. This is not a sentimental tale. Valmorbida writes beautifully about real life with metaphors that sing.

Your novel is brimming with so many vivid details about village life, from doing laundry by hand to embroidering wedding linen to cooking snails and lizards when times are tough. What kind of research did you do beforehand? Was there one resource that was especially helpful?

Since moving to London decades ago, I’ve made countless trips to Italy and filled notebooks with random observations on anything from language to landscape. I have vivid memories of sitting at a kitchen table with an elderly relative or neighbour, taking notes and listening to reminiscences and recipes. People liked telling me things, knowing that someone was genuinely interested in this disappearing world and that they would not be forgotten. It was like a long, haphazard, oral history project.

Once the novel was underway, my trips became more like focused research missions. I explored historic sites and places that are nowhere on a map. Museums, churches, cemeteries, fields. Local books and films. Local special-interest websites that were impossible to find in the UK. I foraged for facts—and edible wild things. I got lost in eBay, a vast research resource that is full of unpredictable discoveries. Michelangelo Frammartino’s film Le Quattro Volte was a lateral inspiration. It’s set in a place at the other end of Italy, and it’s virtually plotless, but I love its patient, attentive, near-documentary gaze. I wanted that sort of intensity as I described my characters doing the washing or slaughtering a pig.

Your own family migrated to Australia from Italy. How biographical is this novel? Is there a woman in your family who bears some resemblance to the heroine Maria?

Every novel contains elements taken from real life and real people, and there are indeed bits and pieces of family stories in here. My grandmothers, my aunts and great aunts—on both sides of the family—they’d all see details of their lives here. There’s also a huge element of the narrative that emerged from somewhere deep inside of me. I’ve been working on this book for five or so years, but in a way it started from a tiny seed a long time ago. I grew up Italian in Australia, and as a child I was spellbound by stories about Italy, world wars, migrations. It would have been sheer wastefulness not to put some of that, and my own personal experiences, into the mix. Even so, if you knew how hard it was for me to create plot, and structure, and ordinary characters in their time—people who are given no voice in conventional historical texts and so are very difficult to research—you’d know how much this is a work of effort and imagination.

What was the most difficult aspect to writing this book?

My writing process is utterly inefficient. I set out exploring—no, that sounds too pleasantly colourful—I set out groping. And stumbling. For a long time. The book’s first draft spanned more decades, more locations, more perspectives, all researched and edited obsessively. After some years, and with constructive advice from my writing group pals, particularly Annemarie Neary, I decided to lop off a third of the text, work intensively into what remained, adding chapters and removing perspectives. It hurt. Not like actual surgery, but no other simile comes to mind. (All the while, I had no idea if one day this labour of love would be consigned to the closet—there’s one broken novel in there already.)

PS: You know that Hemingway quote? “There is nothing to writing. All you do is sit down at a typewriter and bleed.” Melodramatic, but cute.

It almost felt as if the Madonna and Delfina characters dictated their lines to me. They are both, in their own ways, unpredictable poetic voices. There’s something liberating about that. Unfettered. Like dreaming.

Do you remember when and how the germ of an idea for this original novel came about? Please elaborate.

Every time I finish a novel, I go into a mild state of mourning. I feel that something significant has gone out of my life, and I miss it constantly. After a while, fear creeps in: what if that was it—the last one? I feel sure I will never write another book. I know the world can live without another book, but can I live without writing another book? It’s almost an essential need. And yet I can’t imagine what I will write about next. With this novel, as with the others, I started in a state of chaotic unknowing. I’d amassed a stash of notebooks full of handwritten scribbles and sketches, random stuff, much of it rubbish. I decided to collate anything and everything to do with Italy, nature, seasons, food, anecdotes, sayings… It was a laborious transcription, but it yielded a single document full of little inspirations. I started writing about a birth in a remote time and place, from the point of view of a newborn baby girl. It’s a chapter that has well and truly vanished. But it got me going, and Maria Vittoria slowly emerged from her.

How has your writing style changed over the years?

It’s difficult to be objective about it. I suppose my writing has changed with me. The biggest change, I think, is that I am now less terrified about plot. I say “less”, because I am still terrified.

What advice would you give to an aspiring writer?

Write. Notice. Keep a notebook. Read. Write. It’s a kind of fitness. The more you do it, the better you get at it, as long as you make good use of feedback along the way.

What books and/or authors inspire you?

Shakespeare inspires me above and beyond all other writers. His writing is endlessly intelligent, compassionate, inventive, emotive, profound, silly, poetic, romantic, gross, beautiful, subtle, timeless, cross-cultural, diverse… I love the poetry of TS Eliot and I adore Samuel Beckett’s prose and plays. Virginia Woolf is a deep treasure. Margaret Atwood, Annie Proulx, Toni Morrison and Michael Ondaatje sing to me. Two slim novels that are standalone perfection: F Scott Fitzgerald’s The Great Gatsby and The Wide Sargasso Sea by Jean Rhys. Oh goodness, I’ll stop now. Everything inspires me.

How long have you got?