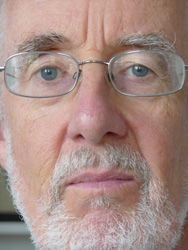 David Mathews is a freelance work psychologist and a fiction and short story writer. He talks to Elen Lewis about how his day job influences his writing and offers some expert advice on getting through the tough times at work.

Bach and Schubert never fail. Eavesdropping – on a bus, in a café – delights. I’m fascinated by rust: the beauty of an iron hinge on a slate gatepost or a lump of old farm machinery sticking out of the soil. Rugby and cricket – Cardiff and Glamorgan – bring me elation and despair, though sadly not in the right proportions. Making a reduction sauce is surely the best thing in cooking.

When they think I’m confident. I constantly expect to be found out, and am relieved beyond measure if someone affirms what I’ve done.

So far? I only joined this year. 26 reminds me of the lives of other people who write for a living or for fun.

How would you describe what you do (in 26 words)?

I explore other people’s trades. I help them bring to mind what they are about, and I write it down. Usually they sort out the rest.

How does your work influence your fiction and short story writing?

It keeps it short. Clients forever want something snappy, so I may now be an incurable miniaturist. Hurrah for Lydia Davis, I say.

As a work psychologist my focus is on the individual. I draw general conclusions about work and various occupations, but what I hold in front of me is an individual in his or her workplace. This has not prepared me for writing great sweeping narratives. At times I simply want to report an imagined conversation or elaborate on something I’ve seen. Perhaps one day a character will refuse to be confined to a short story.

I’m not afraid of research, but I know how to throw away stuff that’s not needed. I don’t feel the need to say everything I can, and I like to leave the reader with work to do.

What’s the most interesting problem people face at work during times of change?

The abuse of power relationships is exacerbated during change. Some people are natural bullies, bullying can easily become the corporate culture, and bullies use change as a weapon. While their rhetoric may be all about opportunity, it’s the less powerful they ask to make the sacrifices. They are fools, of course, because they create an unsafe psychological environment in which people dare not take risks, dare not challenge, dare not speak out – and so bullies learn nothing. The misuse of zero hours contracts and the treatment of whistle-blowers are high profile examples of the exploitation of inequality, but in offices and factories more subtle forms of oppression destroy enthusiasm and energy. It saddens me.

What advice would you offer fellow 26ers on getting through tough times at work?

The old advice: talk to someone. For a year and a half Tom (not his real name) has been having a lousy time in a job he used to love. For once, last week when we visited, he was home in time for dinner, and the whole conversation was about the whys and wherefores of the insanities of the company management. Not a moan, but a thoughtful search for understanding. At the end, ‘I’m sorry, I seem to have done nothing but talk about work.’ And afterwards from his wife, ‘Oh it’s so nice to hear Tom talk about his job – just thinking aloud about what the hell is going on.’

So, talk. And if you’re the listener, do shut up. Don’t try and solve the problem.

In the day job, some esoteric stuff about competences and occupational standards, a process of summing up work in words. Plus trying to understand how work environments can be safe enough, psychologically speaking, but not cosy.

In my stories, setting fictional events in an autobiographical setting. Dorothy Parker and me, you know, we were like that.

I’ve become interested in writing as work: the expectations that we create for ourselves and the sheer bloody business of getting the sentences down in the face of all the other stuff a writer needs to do. Early days, but at some stage I’m going to want to sit on the shoulder of a writer who would like to collaborate on a book about a book. Maybe like Umberto Eco’s Postscript to The Name of the Rose – or perhaps totally different.

Tell us a secret

The best question in the world – if you must use a question at all – is How come? Often it’s the only question I’ve needed. As a genuine enquiry it’s more open and less confrontational than Why? It allows people to answer in a way that feels safe, and they can start anywhere. Often the answer will deepen as they go along, as they think aloud. There’s no better feeling than when an interviewee says, ‘You know, I’d never really looked at things this way before.’ And you seem to have done nothing.