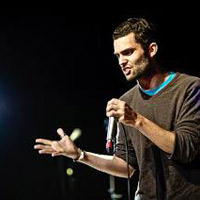 Charlie Dupré is a spoken word artist who has supported the likes of Scroobius Pip, Ghostpoet and Polar Bear. He is the two-time Hammer and Tongue National finalist and he’s currently performing his new show, The Stories of Shakey P, at the Fringe. Charlie talks to Laura Hunter about Shakespeare, hip-hop and performing Latitude.

When did you start writing and performing?

I was always a keen writer at school. I used to write absurdly long essays. I started writing rap lyrics at around 16 when I heard Eminem for the first time, but it wasn’t until I was at university, where there was a massive drum n bass scene, that I actually picked up a mic and started rapping to an audience. This developed into more considered poetry when I started slamming at spoken word nights.

What’s your process? Do you write first and then speak, or vice versa?

Good stuff normally comes when I’ve forgotten my notebook! Whenever I sit down with pencil poised it’s hopeless – you can’t force stuff. A good idea is more likely to pop into my head when I’m out and about, maybe seeing other performers, or just walking down the street surrounded by stimuli. I love writing in public places where lots of stuff is happening around me. The beginning of a piece is always the hardest. Once the wheels are turning, and I can see where something needs to go, then it often just sort of writes itself.

Where did the idea for the Stories of Shakey P come from?

I’ve been into Shakespeare since the age of about 12. I was totally seduced by the stories and characters and when I was planning a spoken word show at the Edinburgh festival last year, I felt I needed a concept to sustain the show for a whole hour. I already had a couple of pieces based on Shakespeare plays, and then I started to notice all the parallels with modern hip-hop. So that became the basis for the show.

How similar are Shakespearian verse and rap?

They are fundamentally the same thing, linguistically speaking. A line of either is essentially a collection of words arranged in a rhythmic pattern according to their cadence. They both harness the musicality of words to add the right sentiment to the line. They also both reflect the world around us, and what it is to be human. Hip-hop has very specific roots and cultural trappings, but it is still part of the ongoing flux of language that morphs its way through the ages.

How much does Shakespeare inform your work?

A great deal. Much of my appreciation of language comes from Shakespeare. Although I’m trying hard to be as well versed in other writers as well!

What can other writers learn from the craft of hip-hop?

Language is like music, and should be treated as such. A sentence can be configured in so many ways to create different energies, just like musical notation.

What do you love about spoken word?

The variety. Everyone that gets up on stage is completely distinct from the last, and has something unique to offer.

Who or what is your inspiration?

Eminem and Shakespeare first and foremost, but many others since.

You’re performing at the Fringe at the moment, and you performed Latitude earlier in the summer. Describe what it’s like performing your poetry in 26 words.

Sometimes it feels like I can think about something totally different and the poem or character will just possess me and perform itself. That’s twenty six.

What’s your best piece of advice for up and coming poets?

Be totally dedicated to improving. And place a value on yourself when the time is right.

What’s next for you?

We’ve just been booked for a week-long run at the Emporium in Brighton (1st-5th October) for which I’m going to do a couple of nips and tucks on the show based on feedback from the Edinburgh run. I’m also about to release a hip-hop version of the Othello piece from the show – a collaboration with producer Polar Snares. The label Rocstar Recordings are keen for us to do a whole album of similar tracks so I guess we’ll get cracking on that. I’m also mulling over the idea of doing a show where I do rap versions of famous philosophers…