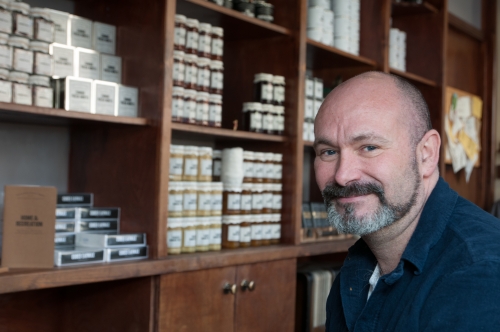 Ben Payne, co-director and co-founder, Ministry of Stories speaks to Elen Lewis about his favourite writing advice ‘don’t be cynical’, the way children teach us how to take creative risks and the story of Both, the Explorational Dog

What is your day job?

I’m Co-Director and Co-Founder with Lucy Macnab and Nick Hornby of the Ministry of Stories. It has been my full time job for just over 4 years now.

I’m not sure that this is very private really, but I am passionate about supporting more children and young people to be more confident about writing and to really enjoy writing in whatever form that excites them. I believe a lot of this comes down to the experience of writing you have as a child and the people you have around you when you’re young. For me, when I was about 9, I wrote a story in long-hand that I gave to my Dad for his birthday. It was called “Both, the Explorational Dog”. Two weeks later, on my birthday, he gave me back 50 copies of it, printed and bound. The surprise and boost that this gave me stayed with me. It probably has rather a lot to do with what I do now for a living many years later. In many ways, I think it’s this kind of experience that we try to give the children who come to MoS.

Describe what you do in 26 words.

I try to creatively think, long-term plan, raise money, build national and international relationships, have fun and do admin. Sometimes, that happens all in one day.

Sometimes, children think I am “The Chief” of the Ministry of Stories, but I’m not. Nobody has EVER seen The Chief. The Chief is our big boss and lives mysteriously behind an office door, on which is helpfully written “The Chief”. The Chief only communicates with us and the children who visit MoS via an equally mysterious tannoy system. Notoriously grumpy, The Chief is nevertheless endlessly surprised by the amazing writing that the children create when they come to the Ministry and is usually impressed enough to publish it. And, no, this isn’t a double-bluff … I’m NOT The Chief.

What can all writers learn from the kids who come to the Ministry of Stories?

How to take creative risks. (I think it was Einstein who said “Anyone who never made a mistake, never tried anything new”. Maybe it’s even more simple than that. Grayson Perry has written above his work bench “Creativity IS mistakes”. We often ask children to do things that we would probably find difficult to do ourselves eg. “Write about what you did in the holidays” (How interesting would that be if you wrote it?) “Read out what you’ve just written in front of everyone else in the room.” Writing is already daunting for many children, just as it is for many adults. By 7 or 8, many of them have already absorbed the idea (from adults) that you can make a lot of mistakes with writing. The joy is that (unlike adults), it doesn’t take a lot to remove that fear for a lot of them. So I think our children teach writers to remove the critical mind-set. It’s this mind-set which creates the fear. They teach us to think about what’s possible, not to concentrate on what’s not possible.

What’s your favourite example of a child gaining confidence through creative writing?

I have two. (You can choose one, if you want, I guess!) Early on in our work, we were able to pair a boy with severe dyslexia with a screenwriter who was dyslexic herself and who also had a dyslexic teenage son. The screenwriter mentored the boy for a term and because in a way, they spoke the same language, the boy was able to write and see published his first short story. Like many dyslexics, he had a remarkable imagination, but had never been able to get a piece of writing down before. It was a major achievement for him. The other is from when we first experimented with speechwriting with one of our after-school groups. We brought in a professional speechwriter to work with the group and, at the end of one of the workshop sessions a boy approached him and asked, “So let me get this right. You get paid to do this? You get paid to write speeches for other people.” When the speechwriter said yes, he thought for a moment and said, “I could do that.” I think these two stories give a sense of what we’re about – supporting those children who, for whatever reason, find writing a challenge, but also providing “light bulb moments” where they see the real possibilities that writing could bring them in later life.

What’s your favourite piece of advice for good writing?

When I first started working with other writers – as a literary manager in a theatre, I asked a friend and somebody who had also done this kind of job for his best advice about how to do it. He said simply, “don’t be cynical.” That’s always stayed with me.

What are you working on right now?

For the Ministry – I’m very excited to be working on a project in which local young people will write their own original comedy scripts for TV, which we will produce later in the year.

For myself creatively – I’m working with a choreographer on a dance show created from the stories of young men and women who have worked in battle zones as professional soldiers. It will tour nationally later this year.

How can we help?

There are two ways that 26 members can really help the Ministry of Stories. We always need trained volunteer writing mentors to provide the one-to-one support that we believe makes the difference to young people with their writing. If you have spare time and you think you can help, go to the link www.ministryofstories.org/volunteer and it will guide you through the process of signing up. If you don’t have time, but you want to support our work, we happily accept donations, small and large! Please email donate@ministryofstories.org for more information about this.