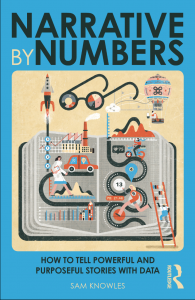 In a post-truth, fake news world, what role can data play in shaping stories? Sam Knowles, explores how data-driven storytelling can help everyone tell more compelling, evidence-based stories in his new book, Narrative by Numbers. So if you’re in the business of convincing people, this one’s for you.

Congratulations on the publication of your book. What’s the premise of Narrative by Numbers for those who haven’t read it?

The Big Data revolution presents every organisation with a delicious paradox. It has never been more challenging to make sense of the myriad sources of data that surround every business, charity, or NGO. At the same time, it has never been more possible to use data as the foundation stones of the stories we tell.

I’m a man on a mission to prove that it’s within everyone’s grasp to resolve this paradox and to tell more impactful stories into the bargain. Narrative by Numbers is my manifesto designed to show you how. The book is also a poke in the eye of the Trumps and Goves of this world who promote a post-truth, fake news world view in which experts and expertise don’t matter. Au contraire.

Can you tell us more about your day job?

2018 is my thirtieth year working in corporate and brand storytelling. After a varied agency and in-house career, I founded my own storytelling consultancy in 2013. The purpose of Insight Agents (www.insightagents.co.uk) is to help companies sound like people. We work with many different businesses, often B2B and deeply technical, to enable them to talk human. For me, the only reason to communicate is to effect change, and people can’t agree (or disagree) with what you stand for if they don’t understand you.

Was Narrative by Numbers an idea that you developed over several years or something you wrote in a short space of time?

Both. 30 years in the making, 30 days in the telling. After meticulous planning and plotting, structuring and note-making, I wrote the bulk of the book’s 50,000 words in just over a week over Easter 2017. The converted farm building my family was staying at in the Lake District had excellent underfloor heating but atrocious WiFi. Both helped with the production of up to 7,000 (first draft) words a day.

In the opening of your book, you mention a formula: “Analytics + Storytelling = Influence”. Can you explain what this is?

You’ll have to forgive the arch rationalist – the scientist – in me. I was originally a classicist, but after a dozen years in consultancy, I went back to school in 2000 and took a masters and a doctorate in psychology. This is where I fell in love with data (and telling stories with data), and it shaped profoundly how I’ve worked since.

For me, this equation encapsulates the two skills that everyone needs to thrive in the modern knowledge economy. These are the ability to look at and make sense of the mass of data that surrounds every organisation, and the ability to use the genuine insights extracted from the data to build powerful and purposeful stories. Do that, and you make it more likely that you’ll convince others of your proposition – provided you blend the rational with the emotional successfully.

Premature specialisation in education and the major “left-brain / right-brain” misunderstanding in popular psychology have kept analytics and storytelling apart for too long. Narrative by Numbers is here to get the band back together.

Your book explores how numbers can help communicators communicate better. What’s the best example of narrative by numbers you’ve come across?

My favourite is Sport England’s This Girl Can, a campaign which convinced almost two million girls and women to take part in regular sport and exercise. “But they didn’t use any numbers in their films” you might say. And I’d agree. But the campaign wouldn’t and couldn’t have had the impact it did without the data that the communications and research agencies and teams used to underpin This Girl Can. The killer stat was that 85% of girls and women who didn’t take part in sport said that one of the major drags was fear or being judged. They were right to think others – particularly women – judge women who exercise. But they judge them positively, not negatively, as they think. Hence the deployment of real women doing real exercise in the award-winning campaign.

I was shocked/fascinated by your analysis of a statistic that was central to Vote Leave’s campaign: the now infamous ‘£350m to the NHS’. Can you explain what made that so powerful?

In many ways, I believe that this discredited, zombie statistic is a profoundly powerful piece of data-driven storytelling. £350m is big but not too big (not £18bn a year, because people don’t like or understand billions). It’s round and rounded up, but not suspiciously so. This suggests it’s been worked out, but it doesn’t show its workings out. In classic narrative storytelling terms, it avoids exposition. Unlike Cameron and Osbourne’s new statistic every day – what Leave dubbed “Project Fear” – it was repeated ad nauseam and became the campaign’s defining earworm. Including by media and even Remainers looking to discredit it. Also, it does the rational + emotional bit incredibly well, combining an apparently-worked-through data point (£350m a week) with the three most emotive letters in the British English political lexicon: N, H, and S.

That’s where my admiration for the number evaporates, because it deliberately avoids context – the context of rebates, for one, which takes actual contributions down to £156m a week. And the context of overall government spending. With Government spending North of £700bn a year, UK plc’s contributions to the EU are less than half of one percent. What statisticians would consider a rounding error.

And because Leave never really thought they’d win and had no actual plans for transition, Farage was discrediting “£350m a week to the NHS” on breakfast TV when the ballot boxes were still warm.

There’s so much data available now, from news and social media data to phone records and the data from our personal fitness devices. How do you make sense of that data and not get overwhelmed by the amount of it?

Start with why, as Simon Sinek would say. Understand what the purpose of your using data to tell stories is. What are you trying to say? What it the hypothesis you’re looking to stand up? Whom do you want to influence to do what? Work like a detective. Don’t go on a fishing expedition or attempt to boil the ocean. With these principles in place, you’ll then be able to find and identify the relatively self-contained data sets you need. These are the principles I regularly endorse on the Small Data Forum podcast (www.smalldataforum.com), which I co-host.

Now, I’m a self-confessed ‘not-a-numbers person’. I wasn’t very good (aka terrible) at maths at school so have always been a bit scared by numbers. What advice would you give to someone like me to build data into storytelling?

There’s no need to become a ninja statistician to use data – qualitative, quantitative; numerical, verbal, pictorial – to tell stories. I was “badly taught” maths at grammar school in the 1980s, and in the fourth stream there were more animal noises than algebra in most classes. But if you adopt the principles outlined in the previous answer, you won’t go far wrong. And a great starting point for getting your critical faculties tuned up is the publicly-available course from the University of Washington, Calling Bullshit in the Age of Big Data (https://callingbullshit.org).

Oh – and I would say this, wouldn’t I? – take a look at a remarkable new book, Narrative by Numbers (www.narrativebynumbers.com).