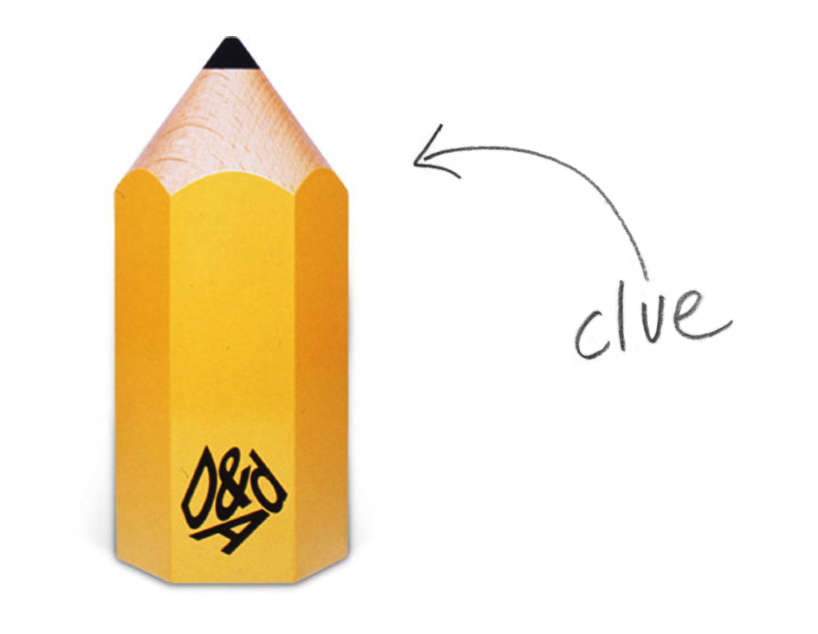 Pads, Pens and Yellow Pencils was a joint event organised by D&AD and 26 to provoke discussion about the Writing for Design category at D&AD, and about writing in general. It took place at the Vibe Bar in London on 11 November 2010.

Audience member Dan Radley and panellist Nick Asbury give their perspectives here. If you were there, let us know what you thought in the comments. We also hope to have a video of the night available soon.

Remember, 26 members can enjoy a 20% discount on Writing for Design entries this year – but only if you enter before 26 December.

The vibe in the Vibe Bar is expectant. The room’s packed to hear the best in the business share their love of words; words like macaroon and flange.

Host John Simmons, boom-miked in a padded armchair (“I feel like Ronnie Corbett”), calls on his guests to be inspiring and provocative.

Up first, Nick Asbury divides the room, arguing that non-English entries should be allowed into D&AD’s Writing For Design awards category. He’s right, of course. Anything less would be hypocrisy given President Sanky’s recent YouTube address in 15 languages.

Nick is spot-on again when he warns that the rise of “tone of voice” is deflecting us from the source of differentiated writing – content, argument and wit.

Ceri Tallett lets us in on her creative process. I love her benchmark, “Does it make my friend Chloe laugh?”
Black pencil winner Jim Davies confesses to the writer’s affliction: thin-skin with an ultra-competitive streak. Then he turns the tables on designers – why not design for writing? This plays well with the crowd.

Will Awdry, the night’s most entertaining speaker, puts a value on words: $23 million, the amount earned by Bloomingdale’s for “Little Brown Bag”.

By now I’m itching to check out three of the panel’s recommendations: urban valentines, Christopher Doyle’s Writing For Design guidelines and a waterfall of words on the Thames.

John wraps up by saying what a pleasure it is to have a roomful of people listening to a talk about writing. For me, the atmosphere of solidarity is the charm of this evening but its downfall as an interactive event.

I’m wishing I’d snapped back at Jim when he said writing for design demands maturity, and that there are only a dozen people he “fears”. Isn’t it simply that literate young people haven’t realised they could be making their living in design? Some of the best writers I know are under 30. Be afraid, Jim.

If anyone cares to take this outside: twitter.com/DamnRadical

What struck me about this occasion was the evident appetite for a good conversation about writing and design. There was a healthy turnout, split roughly 50:50 between writers and non-writers – or, more accurately, people who wouldn’t describe themselves primarily as writers.

Thanks to a good brief from John Simmons, who chaired the event, the presentations were a long way from the ‘let me talk you through my portfolio for ten minutes’ that some might have feared.

Ceri Tallett showed some of the scamps for the pencil-winning Innocent ideas, demonstrating how writing and design are usually joined at birth. There was also a tantalising glimpse of the D&AD Copy Book in the Innocent studio – now surely overdue for a reprint or, better still, a new edition.

Will Awdry made an interesting distinction between Writing for Advertising and Writing for Design. The former is the bowl in ten-pin bowling, hurtling towards its audience and ramming a single-minded message home. Writing for Design is more like a pinball, playfully zipping around and gradually insinuating itself into the audience’s consciousness.

Will’s old school mate (small world) Jim Davies talked about the role self-promotion has played in Writing for Design – a sign of a category that is still maturing. As Jim said, the day Ernst and Young starts picking up Writing for Design pencils will be the real measure of success.

I took up a similar self-promotion theme and also raised the issue of foreign language entries. (A Spanish entry got in-book this year, but the policy has since changed so it’s English-language only.) Most of the audience leant towards allowing foreign language entries, although more than one person at the bar afterwards drew a parallel with the unfortunate couple who got married in the Maldives recently, or at least thought they did.