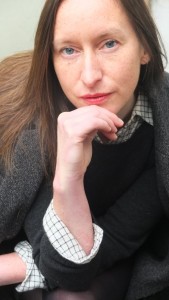 Elena Bowes interviews Joanna Walsh, author of Hotel and Vertigo about stories that are ‘unfoldable’ and the importance of writing about things you find silly: embarrassing, trivial or shameful. We think her answer to what she likes to do for fun, may be the best yet. Read on.

Please explain in 26 words what you do?

I’m a writer of fiction, nonfiction, and sometimes (only for the word count) poems. I aim to write about the inexpressible via the expressible: in language.

Can you explain the link between your two collection of short stories, Hotel and Vertigo which were both published last year?

Hotel is creative non-fiction (memoir), Vertigo is fiction. It’s interesting that, although I have chosen to make a clear division between the two by publishing in two genres, people sometimes get confused, referring to Hotel as a novel, and conflating the characters in Vertigo with me. The books have common themes of internal voice, silence, and women’s roles as mothers, daughters, wives, lovers.

You take the inner world of seemingly mundane women’s lives and turn it into poetry with your use of language. Sentences like “In another country my husband may be sleeping with another woman” in Vertigo, “This hanging onto things is what makes it home, where dates are reckoned from a crack in a teapot’ in Hotel. Can you explain your writing process?

I work from diaries, by which I mean notebooks in which I note things: objects, people, occurrences, words, feelings, thoughts, phrases that strike me, or I find words that seem the right way to say something clearly, which is what I’m always looking for: things are so often wrapped in so many layers of inappropriate words that, that we (that I) can hardly see or feel them any more. I transcribe the notebooks into a file on Scrivener, which is a program that allows me to see my work in blocks, and swap parts around easily. I work a lot via cut-&-pasting. When I realise I’ve noted a number of things that work together I copy them into a separate file and wait for them to take some shape. When they begin to form into clumps, I have to exert some artifice upon them to shape them further. There’s usually a lot of waiting time so that things come together right. It is necessary sometimes to deliberately arrange things, but only when I feel they’re at a certain stage—though I can do this deliberately too: I write a lot of literary criticism, where it’s necessary to shape work quickly, and I’m well aware of wanting not to be too precious with either language or process. I also sometimes write (fiction) in response to commissions, but even then I use a lot of work from my notebooks; I only write about things that seem urgent. And I like all of the process, even the parts I find difficult. I like difficulty.

Your characters always seem far more complex than they appear. You write about the inner struggles facing women in a variety of domestic roles, including mother, wife, daughter and mistress. You write with a lightness of touch. Do you write a lot at first and then edit and hone these stories down to these sharp, telling almost cinematic images?

Writing is artificial: there is no need to say how a character got from one room to another unless it’s important, and I don’t think it is very often. I like to point up the artifice of writing too: this is something some of my favourite writers do. There’s a delight–for the reader as well as the writer–in treating a text like an object: a house of cards that appears to have weight and volume, but can be collapsed and shuffled into a 2d deck.

In an interview you were quoted saying that when you began, you found writing hard and that you don’t like reading writers who are in “control of their material”. Can you please expand on this? And what do you find hardest about writing short stories?

What’s the point of writing something to which you already know all the answers? Writing should be an adventure for the writer as well as the reader. The writer is never in complete control in any case, as the reader always brings a lot to a text: everyone’s understanding of language (and everyone’s social context) is slightly different. In a new thing I’m writing, I tried to explain something about it: “In order to tell my story, I must know little or nothing of what I write until I write it, writing myself out of necessary ignorance, each sentence a performance of inexperience. I must keep on writing to escape knowledge, as knowledge means no more writing.”

The titles Hotel and Vertigo are concise. What do you want a title to convey to the reader?

I like one-word titles. They’re evocative without tying too much down. I chose Hotel (though it was part of a series of books with one-word titles referring to their subject, so I didn’t really have a ‘choice’). My US editor, Danielle Dutton at Dorothy, chose the title for Vertigo (after one of the stories in the collection). I was a bit worried it had been done before, but it seems right now, nevertheless.

I don’t like to second-guess the reader, which seems patronising. It’s likely that certain kinds of readers, who are interested in certain kinds of books already, will be most likely to read my work, but that’s partly a marketing thing. I’m new enough at this to always be moved, and still (I hope this isn’t the wrong word) ‘surprised’ when I find my work makes some kind of connection. In short, I don’t write ‘for’ anyone. I don’t even write ‘what I would like to read’; I write because I’m trying to elucidate some things I don’t see already being said.

What makes a short story successful?

Depends on the story. I’m not sure I like the word ‘success’: it sounds too final a goal. I like stories that are ‘unfoldable’, that retain mystery, that repay different, and repeated readings, that go in different directions simultaneously. As an editor, if a piece of short fiction isn’t immediately doing several different things at once, I’m not interested.

What’s the best piece of writing advice you have received?

I don’t know… I remember someone once telling me something good. I think she told me it was the poet Geoffrey Hill who said it, though I might be misattributing. Whoever it was said that when you sit down to write, you have to be willing to be silly which, I think means playful, as language is a game, but also I think it’s important to consider writing about things you find silly: embarrassing, trivial or shameful. In fact that might be one of the most important things. Writing is a space where you can treat things that can’t easily be said out loud.

I work on lots of things at once. I’ve just finished a draft of a collection of autofictive essays about love and the internet… I’m writing some longer fictional things, which I’m interested in publishing digitally, playing around with non-linear structures, tho I’d like to see them published on the page too, in a more traditional form that would work in its own right.

Fun – what a word! Angela Carter wrote a great essay on the awfulness of it. When I’m not working, or doing household tasks, which are the pursuits that fill most of my time, some of the things I most enjoy are drinking and fucking. But they’re not really, hobbies, are they?