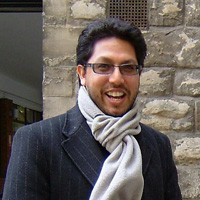 26er Rishi Dastidar writes poems in his spare time. Alongside nine others, he has been shortlisted for Complete Works II, a national development programme for advanced Black and Asian poets culminating in a final anthology published by Bloodaxe. He talks to Elen Lewis about winnowing down his couplets and why he thinks the best collective noun for writers is a wonder.

I’m head of brand at onefinestay. We’re building something called the unhotel, which allows people to stay in some unique homes around the world, while getting the best bits of a hotel-style service. I’m one of the chief propagandists for it, both within the company and in the wider world. So it’d be quite remiss of me if I didn’t say: www.onefinestay.com

Not sure if they’re all that private, but roughly speaking: alternative music between the years 1991-2001; the England Test cricket team whenever they’re winning; pasta, the consumption thereof; dragging my limbs around the streets in the foolhardy belief I’m some sort of runner; American literature you won’t have heard of; plays that verge on agitprop; and poetry, of course, of course, of course.

That I’m any good at what I do. I just pretend really, really well.

Knowing that there are people as obsessed by words as me, only an email away.

Pick your favourite collective noun to describe a group of writers: a shambles; a grumble are all good shouts. But I like to use ‘a wonder’.

What advice would you offer fellow 26ers on writing poetry?

I’m not sure that I’m really in any position to offer any advice – having started writing poems very late on, I’m still very much a newbie, and any success I’ve had has been far more down to luck than any skill, it seems to me. That said, if you are going to write poems:

1) Read lots and lots poems, and by that I mean, not just grabbing the one poetry anthology you have knocking about the shelves. Contemporary poetry in the UK at the moment is daffy, ballsy, playful, exciting, provocative – go to the Poetry Library, go to Foyles, and raid the shelves. Or go online, and immerse yourself there. It’s tremendously easy to.

2) Don’t throw anything away: you really never do know when a draft can burst back into life or a phrase that’s been looking for a poem can suddenly close a line you’ve been wrestling with.

3) Don’t get hung up that you have to write *a poem*: you know, something sonorous and dead serious. You can do that, if you want – but it is meant to be fun, too.

What’s your best piece of advice for good writing?

Ignore pretty much anything I have to say. If you are foolish enough to carry on reading, here’s a thing you don’t see often said: you don’t have to overwork things to death. You’ll be surprised how often you got it right on draft 5 as compared to draft 17. The thing has to have the breath of life still in it.

What does it mean to be selected for Complete Works II?

It is all at once an honour, a privilege, a surprise, a delight… I am gobsmacked to be in the company of such fine talents. I’m also very aware that we’re stepping into some very big shoes: the first Complete Works brought to prominence some fantastic poets, and so we have to make sure we can build on their achievements.

How do you balance writing poetry with your day job?

I’m very fortunate to work for a company that has a strong literary bent anyway, and so my poetic leanings are indulged. I am also allowed to place rhymes in unexpected places in the copy I write, although my lobbying to be named Chief Poetry Officer has so far fallen on deaf ears. That said, there’s still plenty of scribbling at the weekend, as you can’t always get the space and time you need in the office to fine tune a line, or dream.

My folder of starts, couplets and uncompleted drafts really needs winnowing down. And I do also owe someone three poems, so I really need to get cracking on those.

Well, my secrets are mostly wishes. And if I tell you one of them, then it won’t come true.

(after The 13 O’Clock News by Daljit Nagra)
Arrey, you Parliamentary reportering scallyscamp wallah!

You have letting down the lobby; broken the briefings,
something and all.
All this pricking of the ballooning Etonian blandishments

will lead to corresponding correspondent banishments
from the green sward of college for lese-majesté!
You are slipping the power secrets and banana kiss policy

out from under your media macking-mocking-tosh, and
showing our fat legs to the fat voting heads!

Everyone will be thinkee all we is are broadcasting eejees,
being the grindee grindee factotums to these posh-posh
goondas and thugees.
We shall have to do something about you, Lok Sabahing
you a new news rolling berth. Like monkey pedalling
a rickshaw in Dhaka –

that will be teaching you about full revolutions and truth
oscillations! What does it matter, you hear us say,
all your documentary off-the-recording?

It matters muchly because we are everything, and if
we are not everything, the we are nothing! You are a
lokpal who has doomed us

to destruction. Lookee upon your hands! They are stained
with our professional blood! We and you were longee friends
now you are us enemy, – and