Swashbuckle and sally forth! For the latest in our series ‘The Story Works’ with the D&AD, Martin Lee writes that we should take to our briefs like Ahab in Moby Dick took to the seas. In an era of small tidiness, be bold and think big.

We live, and write, in an era of small tidiness. Maybe it’s because our planet is now so crowded that we are confined to ever-smaller spaces. Or perhaps it’s our anxiety about dwindling resources, causing us to turn in, nurture and conserve. What we do not do is rampage across the face of the globe the way our forefathers did. We do not swashbuckle and sally forth across the oceans without reliable compasses or a good measurement of longitude. Google Maps has seen to that. We don’t even go into space the way we did in the 60s and 70s, though we have the technology.

We are miniaturists. It’s not just exploration. Consider our own, narrower field of brand expression and creativity. The grand sweep is not there, the swagger is absent. You don’t read the client brief that has that gleam in its eye, the wild, crazed intent to sweep everything before it. Oh no. For it’s been through the icy chill of Compliance; it’s got share targets in it; customer segmentation information; market research findings (my own discipline’s contribution, mea culpa). The typical brief is a paean to incrementalism, or would be, if a paean weren’t a thing of joy and exultation, a triumph of risk aversion and small ambition. 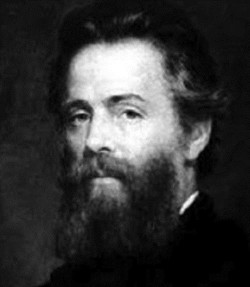 Enter stage centre Herman Melville, with his unfeasibly heroic novel Moby Dick. That beard! No pitiful goatee for Herman. Those faraway eyes, lost somewhere in the roiling South Pacific fisheries. Already we are in the company of epic scale and grandeur.

The plot is simple. Captain Ahab, a whaler of 40 years, receives a commission to take the whaling ship the Pequod on a conventional three-year commercial voyage. But unbeknownst to the owners, he has his own mission – to find and kill Moby Dick, the white sperm whale and fabled terror of the seven seas. Ahab’s last encounter with the famed leviathan resulted in the whale biting his leg off, and he is bent on revenge. With messianic zeal and through sheer force of his demonic personality, he bends the whole crew to his desire. And so the scene is set. Read on.

The book is ill-structured, majestic, maddening, inspiring, often boring, beautifully written, overlong, sensitive, soaring and, crucially, unforgettable. In forty years of reading books, it’s one of the few to have imprinted itself in my mind and heart. How come? Melville knew. A couple of quotes make the point:

‘But I now leave my cetological system standing thus unfinished, even as the great Cathedral of Cologne was left, with the crane still standing upon the top of the uncompleted tower. For small erections may be finished with their first architects; grand ones, true ones, ever leave the copestone to posterity. God keep me from ever completing anything.’

Or more concisely (he was rarely the master of brevity):

‘To produce a mighty book, you must have a mighty theme. No great and enduring volume can ever be written on the flea.’

You can see what he was getting at. Think of it this way: man receives orthodox brief, which, had he fulfilled it in the expected manner, would have been nothing more than a footnote in a dusty maritime log. We would have had no immortal classic; no powerful rumination on the boundary between madness and sanity; no iconic metaphor for ill-conceived danger; no stirring adventure yarn with a cast of extraordinary characters; less provocation for writers and artists to think on a vast canvas and not even Gregory Peck lashed to the side of Moby Dick in John Huston’s 1956 movie adaptation. 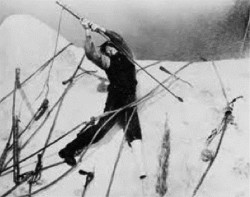 And so to me, lashed to my desk by briefs and deadlines. How Ahab-like am I prepared to be? Or am I happy to live in the world of small tidiness? An advert leading to some sales. A brand experiencing an upward blip in its tracking after a short campaign. No! Rise up, be better than that, have more desire for the stature of my client’s work than they have themselves. The message of Moby Dick is that ambitious greatness that falls short is always more interesting, more memorable, more stirring, than a perfectly realised miniature. Where’s my harpoon?