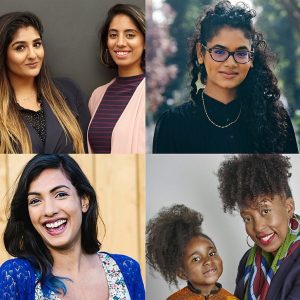 We kicked off last month with an inspiring evening in collaboration with The Other Box and Wonderbly. For those who missed it – Matthew Aldridge reports.

‘In a lot of design agencies I worked for, the diversity conversation was all about gender. What about people of colour? Why are you leaving us out of the conversation?’

This is the guiding principle of The Other Box, a platform to bring about greater diversity in the creative industry.

On November 1st we gathered in the offices of Wonderbly (‘offices’ is actually quite misleading; this was more of a quirky, open plan, converted warehouse in Hackney – replete with Coronas and pizza) to learn more about what The Other Box is doing to bring about positive change, and to listen to talks by three truly inspiring women: Nafisa Bakkar, Shahnaz Ahmed and Selma Nicholls.

The event kicked off with Nafisa, founder of amaliah.com, a website dedicated to representing Muslim women and giving them a voice – whether they want to talk about politics or how to make the best avocado toast.

Amaliah.com was founded to redress the balance of voices being heard in the media, and in the wider cultural sphere. Nafisa looked around her and saw white editors and white reporters dominating column inches. Where was the voice of Muslim women? Moreover, the representations we do see of Muslim women in the media are often negative and very far from the truth.

‘We have to ask ourselves, who is telling our stories? The majority of editors for widely-read media outlets are currently white. We need more Muslim women and people of colour telling our stories, and telling them accurately,’ she said.

To combat this, amaliah.com creates a space where Muslim women can truly see themselves, and engage with subjects that resonate with them, such as food and faith. In addition, her site seeks to rewrite the negativity which Muslim women so often encounter in the media.

Our second speaker was Selma Nicholls. Selma founder ‘Looks Like Me’, a talent agency that seeks to rectify the lack of racial diversity in theatre and film, as well as in magazines and advertising.

We learnt that the inspiration for ‘Looks Like Me’ came from Selma’s daughter. At the age of three, she started asking for her hair to be straight, and eventually declared that she didn’t want to be ‘brown’ anymore. Selma wanted desperately to convey to her daughter that she was beautiful just the way she was, and decided the best thing she could do was to show her people that looked like her.

Selma, realised what needed to be done; and made it her mission to create a talent agency representing a diverse range of children. Looks Like Me has been immensely successful since its creation, and, after securing contracts with the likes of Tesco and ‘Next, it’s going from strength to strength.

Our final speaker of the evening was Shahnaz Ahmed, a designer at Livity. Her talk focused upon the brilliant humanitarian work she is doing through her charity, Knit Aid.

‘Knit Aid’ was founded to provide warm, knitted clothing to people staying in refugee camps, and has since extended its services to actually provide knitting workshops in the camps themselves. Refugees can then sell what they knit through Knit Aid. For those entering the UK, the charity also helps them meet others who have been through similar experiences, and offers support.

After hearing from all three speakers, the event was brought to a close with a Q&A – then it was time to down our Coronas and head off home, inspired and emboldened to support greater diversity in our work.