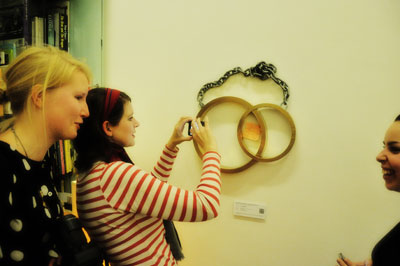 The ‘litterati’ were out in force at the launch of the Throwaway Lines exhibition at The Free Word Centre in October, proving that rubbish is not only good to write about, it’s also worth hanging on the wall.

I’m no stranger to trash. I lived by the sea for a while and beach clean-ups were a weekly event. I gathered countless scraps of rubbish, but never thought of doing anything other than putting them in the bin, thinking they had no more use.

Andy Hayes is no stranger to trash. He’s been picking up handwritten scraps of paper from London’s streets for over three years. But instead of binning them, he takes a moment to read what he’s found. For him, each scrap hides a story. Where has it come from? Who wrote it? And why was it dropped, unwanted, to the ground?

Andy wanted to turn his litter into ‘litterature’, so he turned to 26 and set up Throwaway Lines. 26 writers were paired with 26 handwritten scraps of paper and asked to write a short story. The stories were at turns heart-warming, funny, brave and honest. And they were shown off on the Throwaway Lines blog.

But that wasn’t enough for Andy. Good rubbish should be celebrated, so a second idea was born: 15 designers were asked to frame the scraps, so they could be displayed in an exhibition at the Free Word Centre. The designers’ responses were as creative as they were varied. Gitta Gschwendtner’s cheap black frame hangs unsteadily from a nail, because she felt the narrator in Neil Baker’s story Blame Not the Outcast One ‘seemed unstable’.

In contrast, the frame for Jane Eden’s story Display Until is ornate. Jane told me that as she wrote her story she imagined a sewing box. She didn’t get to meet designer Roy Willingham before he framed their scrap – a piece of tracing paper with the outline of a hand drawn on it – but he reflected her story beautifully in the sewing box frame he made, which included objects that matched those in the story.

Throwaway Lines has shown me a new way of looking at the scraps of paper we see on the streets each day. It’s shown me that creative inspiration can come from even the most overlooked of objects, and that great things happen when writers and designers come together on a project. But, most importantly, it’s shown me that what I once considered trash can actually be a treasure worth writing about.

Listen to audio recordings of the Throwaway Lines stories.