Howard Jacobson at the 26 Annual Speech 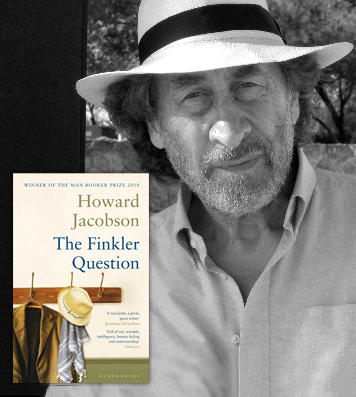 Howard Jacobson turned up to the 26 Annual Speech. It’s fair to say that some other people might had found a good excuse not to, if they’d just won the Booker prize, done 35 interviews, lost two nights’ sleep, shot into the New York Times bestseller list and had their lives changed for ever.

Getting there was tricky. The taxi we’d sent passed him three times but couldn’t manage to stop. The cab driver even called to say that he recognised him, but as Mr Jacobson pointed out, there’s no point being recognised if the cab driver still doesn’t stop to pick you up. But he made it, so before he sat down we’d all got him chalked up as a jolly decent sort of a chap. Of course we’d all been looking forward to it, and we thought it was going to be pretty good. We’d underestimated him. Even though he must have been worn out, he was nothing short of scintillating.

And at the end, he sat and signed books for the queue, and talked to all of us too, properly.

If you were there, you’d probably like to know what he said, so here are some of my favourite bits. (OK, these are the bits I managed to write down; it was a steady flow.) If you missed it, feel free to kick yourself now.

“We’re very thin skinned, otherwise we’d all be footballers. We want the world to be different from the way it is.”

On not winning the Booker prize:

“We’re hurt by it; we’re enraged by it. It’s astonishing more literary judges haven’t been killed.”

On winning the Booker prize:

“You mustn’t use a novel as a vehicle for vengeance. You’re writing with hate in your heart and the novel’s dead because you killed it. (But a smattering of hate doesn’t do any harm.)”

“Bloody plot. Who did it? Who cares? Character is plot.”

“I don’t think of myself as a comic novelist. I write comedy. I’m not the first, but I suspect I might be funnier than the others.”

“I like to find it where it shouldn’t be, where it’s either slit your wrists or laugh… My humour doesn’t tickle you, it hurts you. It’s like being forced to the ground and stabbed in the heart.”

Aunt Julia and the Scriptwriter by Maria Vargas Llosa. “Fantastic. Whoever hasn’t read it must read it.”

Karoo by Steve Tesich. “As black as hell; the comedy is painful and deadly accurate.”

P.S. The other star was our interviewer, 26’s chairman, Martin Clarkson.