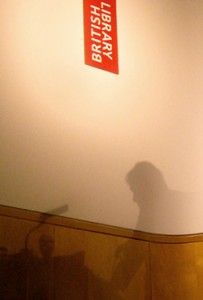 Well, where to begin? First, with a few thank-yous. To Phil Collins himself for a brilliantly insightful lecture (more of which later). To the 250 lucky people who turned up. To event sponsors The Storytellers, alongside IABC, Simply Experienceand The Writer, all of whom contributed to a fantastic evening. And not least to Ezri Carlebach, John Simmons and Martin Clarkson, the three 26 members who took on the weighty responsibility of making this whole thing happen.
As for the speech itself, we’re planning to have the whole thing available for download for 26 members, so I won’t attempt to paraphrase it here. However, in the tradition of political speeches, here are some memorable soundbites:

“A great speech relies on three elements: the argument, the writing and the occasion.”

“A good speech is dialogue in the garb of monologue.”

“You know you’ve matured when you delete a great line because it doesn’t matter.”

“It’s not the words but the facts that make us shiver. The emotional effect comes from the restraint that allows the subject to be its own witness.”

“Jargon is how I protect my right to income from talking this way.”

“Absorb half a dozen great writers every year.”

“No joke will survive a committee of six people.”

“Always be sure to let the audience know exactly when you’ve finished.”

Just about every sentence was equally quotable. The final Q&A session also led to the startling revelation that Tony Blair’s choice of early morning attire is usually “some combination of boxer shorts, Ugg boots and tracksuits.” If you work for theNews of the World, feel free to pick up that exclusive and run with it.