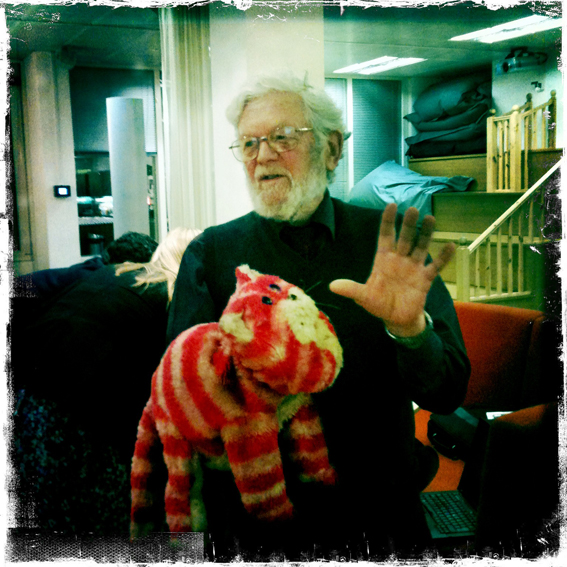 I never thought I would live to see grown men queuing excitedly to have their photo taken with a couple of cuddly toys. But it came to pass on 20 January at the Skype HQ, when Peter Firmin gave a talk to 26 members about his life as the creator of Bagpuss, the Clangers, Basil Brush, Noggin the Nog, the Pogles, and Ivor the Engine, to name only his most famous characters. During his nearly 50-year association with Oliver Postgate, Firmin provided a foundation for the imaginations of millions of children worldwide, all of whom are now adults with very fond memories of his work.

Bagpuss and a Clanger were sitting quietly on a table, and people rushed up to touch them before the talk, as if they were holy relics. Which of course, in a way, they were. ‘What an honour to pose with icons from my childhood,’ said one 26 member.

John Simmons, director of 26, remembers that, when he was at university in the sixties, the only programmes the students would watch were Top Of the Pops and Clangers. In the nineties he met Firmin while designing a series of stamps representing children’s literature, using Noggin the Nog and Bagpuss.

Originally from Harwich, and the son of a railway clerk, Firmin went to art college in Colchester and London. He married and had six daughters, and went to live in the country near Canterbury. He met Postgate when the latter was looking for a student to help him make children’s TV programmes. ‘I didn’t think much of telly at the time,’ said Firmin. They made an animated story about a mouse, using Visimotion, which involved magnets, then Ivor the Engine, working together in a row of converted pigsties. Firmin also, briefly, worked with Rolf Harris.

Firmin never formally trained as a puppet maker, and often recycled old materials, and in the early days, a lot of their equipment was home made anyway. In one picture he showed us, of the Pogles Wood set in the mid-sixties, a National Dried Milk tin is clearly visible, being used as a light.

They then developed a character called Moonmouse, who had his own planet and spoke in hoots and squeaks. And lo! In 1969, the Clangers were born, soon to be joined by their fellow citizens the Froglets, the Cloud, the Iron Chicken, and the Soup Dragon. ‘We don’t know what’s going on, darling,’ said the BBC; Postgate was imagined to be ‘on something’. Firmin laid to rest the idea that the Clangers were, in fact, swearing heavily behind the swannee whistle noises, and assured us that the telly was very strict in those days. ‘Basil Brush wasn’t even allowed to say “darn”.’

Then, in 1974, along came Bagpuss. They mocked up the window of Firmin’s new extension to look like a shop, and his daughter Emily posed obligingly. In 2000 Bagpuss was voted number one children’s programme of all time. The toys made a lot of money and enabled Postgate to support a Romanian hospice.

Firmin, despite having retired ‘several times’, is now illustrating fairy tales and going on adventures with the Jubilee Sailing Trust, which takes disabled people and volunteers on beautiful wooden ships. He encouraged everyone to make a donation. 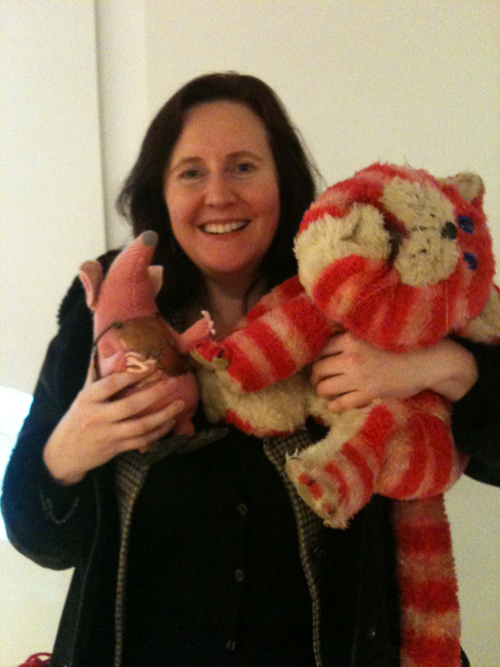 John very obligingly took a picture of me with Bagpuss and a Clanger. Somehow I have regressed to eight years old. I was still smiling, in a delighted and almost narcotic haze, throughout the next day. Thank you to 26 for organising such a cheering evening.

Thanks to Jessie Simmons for the feature picture of Peter Firmin