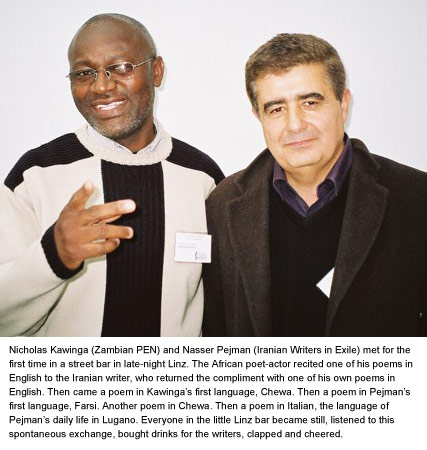 “Is that the chocolate?” friends asked in casual conversation before I left London for Linz. “No, it was Hitler’s adoptive home and capital of choice. But this year it’s the European Capital of Culture.”

How appropriate that Linz should be the meeting place for the world’s writers – poets, bloggers, essayists, journalists, novelists, dramatists, lyricists – lovers of literature, champions of the right to write, agitators for the release of imprisoned and silenced writers everywhere in this wide neurotic world.

This was the 75th International PEN Congress. A week of words for action. Think United Nations of Writers. A huge hall filled with people of every language and face. A line of interpreters’ cabins, the murmur of translation, the clarity of campaigns. So much intelligence and goodwill concentrated in one spot!

I feel sure that this energy went some way to counteract the unhappy history of Linz as Hitler’s favourite. (Vienna was too ‘degenerate’ for him.) A bus of us made a trip to nearby Mauthausen, once a Nazi concentration camp for political prisoners. Here, 200,000 individuals were degraded, starved, worked to death. Many were shot or gassed. Fifteen thousand of these ‘political prisoners’ were children. In the cold grey light of late October 2009, the Austrian PEN team laid a wreath and spoke emotively about our role as writers to help prevent such horrors from happening again.

Back at the Congress, we attended workshops and voted on resolutions. Green cards, yellow cards, red cards. We talked and listened. About the PEN culture of ‘temperantia’ – mildness. (How beautiful is that?) About repressive regimes and delinquent states. About literature becoming pictorature in the age of the image. About ‘difference’ being ‘differently good’. About laws that struggle with the freedom to express hatred. About disappearing languages, and disappearing writers, this year, today. We stood in silence as names were read of the missing and dead.

I went to Linz as a member of English PEN, but also as a representative of 26, working with Harry Pearce of Pentagram, talking about visual and verbal identity. The partnership of these organisations started a few years ago, when 26 co-founder John Simmons met with International PEN’s executive director Caroline McCormick. Since then, many 26ers have joined in – working on Free The Word! literary festivals at London’s Southbank, assisting with a global organisational review, exploring the territory of translation in exchanges with PEN writers, then a London Design Festival exhibition and book, and on we go: writers helping writers, for love not for money, for ‘mildness’, for the love of words.

26 member Elise Valmorbida is creative director of word-design. Her latest novel, The Winding Stick, was published in May 2009. See www.word-design.co.uk/fiction.