For our latest project, 26 of our members were paired with historic writers from Norwich, England’s only City of Literature, and asked to write something. Jane Chittenden was paired with Mary Mann. Unfamiliar with Mary’s work, Jane set off in search of the author. 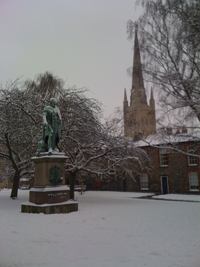 My author is Mary Mann (1848-1929), described as a ‘rural novelist’. She’s a contemporary of Hardy and covers similar themes but with a more intimate close-up view, clearly and coolly observed from real life without sentiment. I’m ashamed to say that I had never heard of her. So it’s a steep learning curve – but what brilliant fun. I feel like an amateur detective.

I started with a visit to our local history centre in the Forum (very helpful) where they pointed me to the Oxford Dictionary of National Biography. And that gave me two pages of reliable facts to work on.

Next, I took a look at Town Close House, where Mann lived as a child. It’s in one of the most sought-after areas in the city, a handsome early Victorian mansion set in a leafy avenue that seems more country than town. Then off to Shropham, about 25 miles south-west of Norwich. With the help of an Ordnance Survey map, I tracked down both of the farms where she lived with her farmer husband. It must have been a stark contrast with the buzz of urban life – it’s a tiny village and rather remote.

I’ve also tracked down some of Mann’s books, but the twist to this tale is that the reason I’ve never heard of her is that she’s largely forgotten nowadays. So the hunt for information might hit some obstacles, I thought. But I was wrong. The Norfolk Record Office holds 32 boxes of Mann’s personal papers, as I discovered on a visit there; it includes photographs and letters as well as original manuscripts. I’ll need to make sure that I’m not swamped!

This week I’ve met up with my UEA ‘twin’ Kieren McCallum. We’ve swapped notes on our findings so far, then we popped in to the Writers’ Centre (braving a lot of snow and ice) to say hello to Chris Gribble and his team. They provided us with more information, so we’ve got plenty of material to work on.

I’m delighted to be collaborating with Kieren, not least because we have complementary interests. I’m especially interested in the history of the city (past and present), whereas Kieren is more interested in a critical appraisal of our author’s work. We’ve already found several ways that we can explore our subject. We’re starting to think about our responses, but that’s a story for another day.