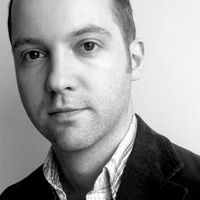 To Manchester’s achingly hip Northern Quarter to meet Nick Asbury, a marketing copywriter with a broad range of clients and a furious turnover of jobs. He’s also the creator of some superb pieces of promotional material including Pentone, a cool spoof of the Pantone chip idea using different tones of voice instead of colours, and D&AD yellow pencil-winning Corpoetics, a collection of ‘found’ poetry from the websites of well-known corporations. He’s written a book – Alas! Smith and Milton – about the agency of the same name and runs Asbury & Asbury, a creative partnership with his wife, designer Sue Asbury. What a busy chap.

How do you describe what you do?

When you say “copywriter” people assume you work in advertising, so I usually say I’m a copywriter for design. A good 80% of my work comes from design companies and branding consultancies. So the designers do the visual side of things and I do the verbal side of things. You could call it branding with words rather than images.

How did you get started?

I did an English degree and finished that without a clue what to do. Eventually I saw an ad in The Guardian for a graduate trainee copywriter at a recruitment advertising agency, a very unglamorous corner of copywriting. I got the job and spent six months writing recruitment ads. I remember rushing out to buy the paper to see my work. I think my mum and dad pretended to be more impressed than they were.

Did you learn anything really important doing those early ads?

I think recruitment advertising is a good training ground for copywriters. You have a very tight brief – who, what, where and so on. So the first things I learned were about structure and reducing things down to fit a quarter-page space or whatever. It teaches you discipline and how to prioritise messages.

Not exactly. My main interest outside copywriting is poetry. I think having interests beyond copywriting definitely gives you an extra set of reference points. There are lots of parallels between copywriting and poetry, not least because poetry is about using as few words as possible to say as much as possible, exactly the same as copywriting. Plus it’s a great source of phrases to steal.

Tell me about your Corpoetics piece

I was going through a phase of reading lots of poetry and books about poetry, and I came across a reference to found poetry. I thought, “that’s interesting”, and later on something clicked and I realised I could make found poetry out of corporate copy. I went to the About Us section of McKinsey’s website – the most corporate thing I could think of – and set myself the task of using only those words. Then I did it again and again with other companies’ copy. I did it for pleasure but it worked really well as a promotional piece, which I sort of suspected it would all along.

And the Pentone thing was in a similar vein…

Yes. It’s not a case of thinking “I need to do a business mailer, how can I be quirky?” but rather I’m constantly surrounded by design paraphernalia and at some point the penny dropped. I realised I could change “Pantone” to “Pentone” and do something on tone of voice. I have to say that with both Corpoetics and Pentone it really helps that my wife is a designer. In fact marrying a graphic designer is a great career move for any copywriter – she does my website, mailers and so on…

My next question is about any tips you’ve got, and clearly the first is “Marry a graphic designer”. Any others?

One of the best I’ve got isn’t so much a writing rule as a general business rule, and that’s “pick your battles”. You’re always engaged in this struggle between trying to do brilliant, creative work that can go in your portfolio, and doing whatever will make the client happy so you can get your invoice out. I remember being told early in my career that every job is a potential award-winner and that you should fight for it with the client. And I gradually came to realise that’s not the best advice, because if you really follow it then you’ll drive yourself mad. I freely admit that some jobs are fundamentally dull and just need doing as well as possible and showing the door.

Who’s influenced your thinking as a copywriter?

I came of age professionally at a time when wit was paramount, and the book that captures that is “Smile in the Mind” by David Stuart. On the other hand I do think you can become too obsessed with witty ideas. Sometimes the answer is just to do a well-crafted piece of copy that conveys the right messages and embodies the right personality.

What’s the hardest part of a job?

Getting the first sentence or paragraph right. I might rewrite it 30 times. If I worked with paper I’d get through a small wood every day. That said, the hardest part of being a copywriter is really all the stuff that goes around the writing. As well as being a copywriter, I’m effectively the account manager, new business person, finance department and so on. That’s what keeps me awake at night, not the writing.

Every job starts with a brief of some sort. What separates the good from the bad and the ugly?

I don’t mind too much whether the brief is narrow or wide open – what matters is that it’s clear. It makes writing so much easier. With 70% of jobs you don’t get that, so the first stage of your job is to clarify the brief. Most of the briefs you’ll receive over your career won’t be very good – that doesn’t mean you should tear them up and walk away; instead you need to develop a knack of seeing through the brief to what they really want to say. My grandad used to tell me about his army training exercises, where they’d be walking through fields looking out for snipers in the undergrowth. His sergeant would tell him “Don’t look at the bushes, look throughthe bushes.” It’s the same principle.

How do you plan and prepare?

I record a lot of meetings and transcribe the important bits. I then scribble down notes and draw circles around the best bits. So the argument almost forms itself out of a cloud of chaos. The thing is, for some jobs I almost feel I could write the piece after one phone call and that the extra meetings are more for their sake to offer reassurance. That said, you have to guard against complacency and formulas. You need to keep it fresh somehow, as much for your own interest as anything else.

And on that subject, how do you break out if you’re stuck?

If I’m stuck it’s usually because I’m uninspired more than anything else. So I leave it and go for a walk and come back to it when I’m feeling more upbeat. It’s the exact same job but somehow it’s become more inspiring in the meantime. I do try to write when I’m in a good mood; if I’m feeling turgid I’ll try to do invoicing or something. Or I might break off to read a poem, or even write a poem, just to engage the other side of my brain.

How do you know when something is really working?

It’s when you know what the next sentence is going to be before you get there. About halfway through a good piece, I’ll also realise what the last sentence is going to be, so it becomes a pincer movement. You just need to fill in the rest then. That’s not to say there isn’t a lot of humdrum stuff along the way where it feels like walking through treacle – you definitely shouldn’t become a copywriter if you’re not prepared to do the boring stuff.

Any sage advice for young writers?

Just start. Take some press ads and rewrite them, start a blog or website, write articles for a magazine – anything to help you stand out. Or just write a really good letter to the top design and writing companies and ask if they want an in-house junior. You should also join 26 and get to know people. But mainly just get writing.