Rhian Harris, director of the Museum of Childhood, is the brains behind the Modern British Childhood exhibition where 26 writers and local schoolchildren have been paired with childhood treasures from the last 64 years from Star Wars figures to a ration book 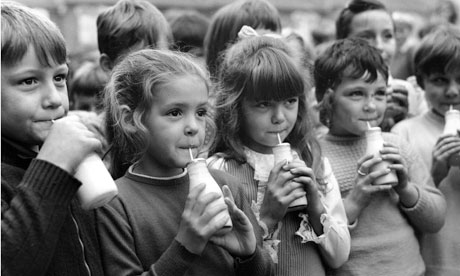 If you could write about one object in the Modern British Childhood exhibition, which would you choose, and why?

The 3/4 of a pint milk bottle, 1970s. I find this simple object very evocative. It has many levels of meaning, from the personal – I distinctly remember drinking the luke-warm milk before break-time – to symbolically representing a nation feeding its children after the war.

What lost object from your own childhood would you like to own again, and why?

My Fisher Price School House – I absolutely loved it! It had magnetic letters that stuck to the roof and mini-figures that small hands could manipulate easily. It provided hours (actually years) of imaginative play. I remember, after I’d had it a while, painting and drawing all over it so it resembled a multi-coloured den rather than a school.

Hop into my time machine and it will take you back to one specific hour of your childhood – where and when do you want to go, and why?

I would love to revisit Christmas Eve when I was about seven and to recapture the unbelievable giddy excitement and almost unbearable anticipation of what the next day might bring. Getting ready for bed, the strong feeling I would never fall asleep (I always did) and willing the next day to come…

Can you surprise me with one unusual fact about your childhood?

I attended the Miners’ Strike March in 1974 when I was six (I came early to politics!). There was a long coach journey from Harlech, North Wales, to London. Whilst on the march and seated on my dad’s shoulders, I shouted through a megaphone “Thatcher, Thatcher, Milk Snatcher”. No idea what I was saying but very topical for Modern British Childhood.

What’s the earliest thing you can remember writing?

I entered a writing competition when I was about nine, run by my local library. I had to write about my favourite character in a book. I wrote about Pippi Longstocking and won! I was overjoyed and given a book as a prize – The Brothers Lionheart – signed by Astrid Lindgren herself.

Read more about the 26 Treasures Childhood exhibition on our blog. Come along to the exhibition at The Museum of Childhood from 13th October.