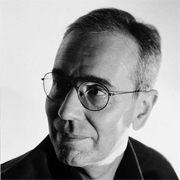 If there’s one person responsible for raising the profile of business copywriting and writing for design over the last decade it’s John Simmons. He might blush, but the influence of his books and the Dark Angels writer training courses he helps run can hardly be overstated. He’s also one of those remarkable people who seem to know everyone. Forget six degrees of separation, John is more a one degree of separation chap. Always absurdly encouraging and generous with his time, I met John in the cafe at the Royal Society of Arts in Covent Garden where we chatted over the clink of cups and saucers.

I know you describe yourself as a business writer. What’s the difference between that and a copywriter?
Not much. Your description of copywriting as ‘writing that sells’ is a good starting point, although it could be argued that most writing for business is also to do with selling something, even if it doesn’t involve the exchange of money. I think business writing is broader, while copywriting is more specialist. Business writing also tends to be longer in terms of word count. Even long copy ads are actually quite short compared to a lot of what I do.

On that subject, how much writing do you do these days?
Quite a lot – I think it’s important to keep my hand in and it helps me to write the books, after all, who am I to speak if I don’t do it myself? I do a lot of work with design agencies, mainly with people from my past. Since I left Interbrand in 2002 – I was director of verbal branding there for several years – the wonderful thing that’s happened is that it’s freed me to work again with a lot of people I knew in my earlier days like Domenic Lippa and Harry Pearce who are now partners in Pentagram.

You’ve clearly resisted the tendency amongst senior people to step back from hands-on work and concentrate on consultancy…
Yes, I have resisted, mainly because doing this kind of writing keeps me in touch. It keeps me sharp. And things develop – the copywriting of today is different from the writing of ten years ago so you have to stay in contact with that. But I’d also say that a lot of the writing I do is a form of consultancy – it’s writing to think through a problem and come up with the best words to solve it.

How did you get started?
At university I wanted to be a novelist. That didn’t turn out to be a practical career so I got this strange job working for the National Economic Development Office where I was communications manager. They produced reports about the clothing industry or the retail industry or whatever. They were pretty dull, so I had to make them accessible to the people working in these businesses. What I really learned was how to turn industrial gobbledygook into language that ordinary people could understand.

I’ve often thought that much of the writing we do is really translation…
I absolutely agree. We’re translating from the sort of words understood by one group into the sorts of words that would be understood by a much wider circle.

What sort of hours do you work?
Years ago one particular firm of designers called Lock Petterson asked me to do some moonlighting from my day job. And that’s where I got into this habit of working that I still maintain. I had a full time job and two young children who I wanted to give as much time to as possible, so I had evenings and weekends free. I would get home from work, put the kids to bed and then work from 8pm on Friday evening to 2am on Saturday morning – six hours of concentrated writing. That worked for me and I’ve continued to do that ever since – it’s my time to do my most important writing.

Let’s change tack slightly. Any personality traits that mark out copywriters?
I’ve thought about this before but I’ve not come to any firm conclusions. It’s not even an obsession with the craft of writing because I’ve come across writers who don’t share that. Copywriters can be very different people, and I think copywriting needs that. Actually I’m going to contradict myself now and say there’s an element of being comfortable with being a bit of a loner, but then lots of copywriters work well with art directors or designers so even that’s not always the case.

And on that subject, do you have any golden rules for better writing?
I think there are some fundamentals – often fairly obvious ones. For example write with personality, draw on your own experience and put it into your writing. I get quite shamelessly emotional in my writing at times. In fact some of the best writing I do with tears in my eyes, not just brought on by the fact it’s 1am and I want to get to bed.

Touching people like that is unusual in copywriting…
Well, while it’s important to be objective in some forms of copywriting, some of the best writing works by being emotional rather than purely rational. You need a good rational case whether you’re writing an ad or whatever – David Ogilvy talked about the importance of doing research and getting your facts straight, but then you have to bring something else to it. If that wasn’t true then PowerPoint slides full of bullets would actually work.

Talking of Ogilvy, who are the key influences on your writing?
It starts with my school and university days. I’m a writer now because of the things I learned then, so my influences are from the world of literature, particularly Dickens and Shakespeare. Amongst modern writers I like John Irving, F Scott Fitzgerald, Patrick White – an Australian writer who won the Nobel Prize in the early Seventies. For me to become a better writer, I need to become a better reader, so I’ve always a book on the go. When I first got serious about copywriting I read Wally Olins’ ‘Corporate Personality’ and Ogilvy’s various books.

What tools do you use?
I always do my first drafts in longhand using a pencil. On paper or in a Moleskine notebook. Later I write everything up on a computer, but writing longhand gives me a closer connection with my thoughts. You were asking about golden rules, well that’s a golden rule for me.

What’s the hardest part of writing for you?
Working on anything that doesn’t have any meaning for my life. I’ve never got on with working for financial companies, although I can’t avoid them.

Short copy or long copy?
I like longer pieces. I like what you can develop in a longer piece in terms of logic and the ability to really influence people emotionally – I find it very hard to do that with a strapline. Even the best examples you can think of, you can imagine a backstory behind them that would make them much more powerful. For example, ‘Just do it’ doesn’t mean much, whereas if I wrote the story of Roger Horberry going to Amsterdam and running the marathon and the achievement and commitment behind that there’d be much more impact.

What sort of research do you do?
Reading mainly. I obsessively note take. I then read through my notes highlighting what I think is really important and use that to structure my argument. So I plan in my head and write my first draft directly out of my rough notes. I said reading is important but is talking to people is even more essential. They say really significant things without realising it – it might just be a word of a phrase – and suddenly there’s your answer.

Where do you start when you’re writing?
I start anywhere. Beginnings are important, but often you find your idea for a beginning half way through or at the end. Last week I was writing a brochure on personal finance for Pentagram and I’d spoken to someone who made this analogy about shoes. So I started with the idea of shoes just to see if I could do anything interesting with it. It might turn out to be a small part of the finished thing, but it’s a way in.

If you’re stuck, how do you break out?
The best way is just to start. Spend ten minutes just writing whatever comes into your head and go into a Zen-like state as you do that. After ten minutes look at what you’ve got and you might have a load of rubbish or you might have something really worthwhile. I’ve a lot of books on the shelves at home so perhaps they help. For example if I’m writing about a spa I might open up a book like Patrick Suskind’s ‘Perfume’, only to discover it’s a great book about how to be a psychopathic murderer rather than an investigation of the senses.

How do you know when something is working?
Sometimes I go through a stage that’s quite close to anger. I’ve got all these resources and notes and I’ve worked myself almost into a state of rage because it won’t come. And then something suddenly emerges from this and the anger subsides and I know I can get on and do it, and that’s when it’s happening.

What’s the best way for someone to improve their copywriting?
Practice, practice, practice. The more you do it the better you get. Reading books about copywriting is important. Reading books that aren’t about copywriting is even more important. And you’ve got to want to be a writer – actually, going back to one of your earlier questions perhaps that’s the only thing all copywriters have in common.