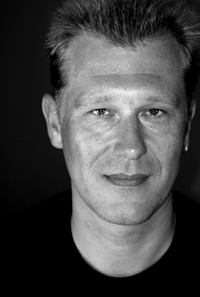 To leafy Leamington Spa, to interview design-savvy writer Jim Davies, who picked up a D&AD black pencil for his work with the Partners on the National Gallery’s Grand Tour, and keeps us amused with his monthly observations in ‘Design Week’.

The taxi driver who picked me up at Leamington Spa station generously provided a running commentary on property prices and sites of local interest, including what he proudly claimed was the first polo field to be built the UK. After I met Jim at his historic pile (complete with priest hole, which I mistook for an airing cupboard) he told me the polo stuff was nonsense and that it had all been built after he arrived in the area a decade ago. Oh well. After lunch Jim ushered me into his office under the eaves of the house. I couldn’t help noticing his D&AD black pencil, recently awarded for work with The Partners on the National Gallery’s ‘Grand Tour’ project. His wife and business partner Deborah brought up tea and we got going.

How would you describe yourself?

I’m a copywriter. I’ve made a conscious decision to call myself a copywriter to differentiate what I do now from my previous job as a journalist. Plus I’m not so interested in consultancy or training. I really enjoy doing consumer-focused stuff like books, mailers, pieces of print and ads – in fact I get most buzz out of doing short stuff like posters. Rightly or wrongly I describe that as copywriting.

How did you get started?

I did English at university, I couldn’t get a job, so I went to the London College of Printing to do a publishing and production course. At the end I got taken on at Haymarket Publishing as a sub on various magazines. At the time Haymarket did a design mag called ‘Direction’ where all the cool people worked. I was desperate to get in there, and eventually I they hired me as a writer-cum-sub, apparently on the strength of my haircut. Anyway, ‘Direction’ eventually folded but by that time I’d built up lots of contacts in the design industry and I’d already been moonlighting as a copywriter for a while. So I went freelance and the copywriting eventually displaced the editorial work. Today the only editorial I do is my column in ‘Design Week’.

How useful was that training as a journalist?

Oh, very. It helped me develop my own style, also subbing is brilliant discipline. In copywriting no one really checks your work for spelling mistakes or typos, so it really helps there. Actually I think the skills are quite transferable. As a copywriter you have to be strict with yourself regarding length and get to the point quickly. But subbing is undoubtedly a good start for a copywriter.

It can do. Some jobs are freer than others but I quite like the discipline it takes. I like the challenge of getting something creative into a tight brief, even if it does get booted straight out again.

You’ve met lots of writers over the years, what makes a really good one?

I think they write like they speak, or at least how they’d like to speak. I’m not a particularly good speaker, and if I could change the way I speak it would be to make it closer to how I write. Good writers are also good observers and they’re great at picking things up – the whole magpie thing. I wouldn’t quite say I steal things, but I do store them away and use them as inspiration. Good copywriters are also good mimics and adept at going into character, although one of my bugbears at the moment is that everyone is going into the same Innocent-esque character. Every sentence is short and staccato so there’s no rhythm or change in pace, and far too many sentences begin with “And” or “But” – it’s like they’re trying to hard to prove a point. It’s not Innocent’s fault but that’s what’s happened.

The first sentence is the most important, but the second sentence is the hardest to write. The first line is the hook that has to provoke the reader in some way, but once you’ve done that you’ve got to follow it up. That’s why the second sentence matters so much, because it’s got such a vital supporting role justifying and expanding the first sentence. Also don’t leave things to the last minute. I never deliberately pace a job so that the bulk of the work is left undone until the last moment. I’m one of these people who needs to be at the station 20 minutes before the train leaves.

A lot of what we write is incredibly boring, and the only way to get through it is to create interest for yourself. So I might put something in a piece that I strongly suspect won’t get through just to test the water. Often it’s the clients who don’t quite know their mind who offer the best opportunity to push things. Finally don’t take things too personally. I’ve worked on documents for months, doing draft after draft, only to have them rejected by the MD. It’s annoying but you’ve got to develop a thick skin. It’s only a job.

Any big influences on your writing and thinking?

Definitely PG Wodehouse. What’s great about him is that he’s accessible but the sentences are so well constructed and so witty. I’m just constantly amazed by his skill. I admire the work of fellow 26 members, particularly Tim Rich and Will Awdry, and classic 1980s ad people like Tim Delaney and David Abbott.

How do you go about planning and preparation?

I go over everything the client send me, reading and digesting. Then if it’s a complex job I get a big pad of paper and jot down ideas in little sentences and phrases. Next I’lI highlight any that look promising and I start writing, usually with a headline. I don’t order the ideas in advance, instead I might do three of four versions, and show the client the best two – I’m talking about short pieces here, not books obviously. After I’ve done the headline I’ll really concentrate on the second sentence as I said earlier and build it up from there, subbing as I go and editing very closely line by line and paragraph by paragraph. Anything up to around 1000 words I’ll write it straight out of my head; if it’s longer I might make a list of the main points I want to get over and chunk it up.

Let’s talk about briefs. The tighter the better?

Not necessarily. I like the responsibility of coming up with an idea that’s mine rather than one provided by the client. Once you’ve established trust with a client I quite enjoy finding my own way into a job. What I like is room to be creative. I don’t like it if they’re too specific, because that means there’s no room for manoeuvre. The main thing is having enough information. I hate having to call people all the time for information, only for them to tell me, “well, you’re the writer”. Well, exactly, I’m the writer, not a mind reader.

Do you read much?

Not as much as I’d like these days, but at university I was immersed in the cannon. That’s paying off now, because one thing I was very good at was taking a dense passage of prose by say James Joyce or Henry James, deconstructing it and then reconstructing it, which is what I do these days if I’m dealing with a technical subject.

How do you know when something is working?

When Deborah says so. I’m only half joking – it’s important to have someone totally honest to review your work. If something isn’t quite working it’s a good idea to try deleting the first paragraph. Generally you’re just warming up and that’s just wasting space and scene setting. You tend to get to the meat in the second paragraph.

And finally, any advice for the aspiring brilliant copywriter?

Just try to inject some personality into your writing. Inexperienced writers tend to go into this strange formalese when they write copy, so it’s about deciding what sort of character this business might be, which in turn is about talking to the client and translating that into natural speech. Sometimes they embrace it, sometimes they don’t, but you’ve got to try. And if you’re stuck, try playing the Ramones at top volume. It works for me.