An interview with Barbara Taylor, historian and author of The Last Asylum. 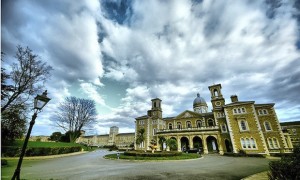 Barbara Taylor is Professor of Humanities at Queen Mary University of London. She is also author of The Last Asylum, shortlisted for Canada’s prestigious literary RBC Taylor prize. Part-memoir, part social history, The Last Asylum is “the story of my madness set inside the story of the death of the asylum system in the late twentieth century.” 26’s Elena Bowes speaks to Taylor about her unflinchingly honest memoir.

What compelled you to write The Last Asylum?

My primary motive was the opportunity to do a different kind of writing, using memoir and to try out another genre. But as I began to write, the reasons changed. I wanted to tie my story to the larger historical story of the rise and demise of the asylum. And because Friern was such an iconic asylum, it seemed like a good story to tell. I also wanted to talk about the state of mental health services today.

Writing a memoir is a risky business, laying yourself on the line for all to see. How much did you grapple with this?

I think I’d been thinking about this for quite a while because I had written memoir pieces before but nothing so substantial. The only one that was likely to have wide readership was done under a pseudonym in the London Review of Books. So I’d been thinking about the business of self-exposure for quite a while. I felt it was less risky for someone at my age than for someone who still has to carve out their lives. I had reached a stage in my life where I felt professionally I was pretty much where I wanted to be.

It depends very much on what life stage that they’re at and what the consequences could be. If a book is likely to garner applause and offer literary prestige, that can be invaluable for a writer. But for an academic, or someone in another professional area who still has things they want to achieve, places they want to get to, they need to be very cautious.

Why did you call Friern your ‘stone mother’?

I borrowed the term from American Asylum studies. I didn’t coin it. It certainly captured peoples’ imaginations. It’s the combination of feeling looked after, being able to have a sense of dependence and reliance on an institution even though that institution isn’t an easy place to be. I did feel a sense of being cared for although at times, that was very attenuated. It offered major challenges.

What do you think about the UK government’s decision to replace asylums with community-based services?

I think had it been done with better funding and qualities of services, had it been thought through, had the services provided recognized the need for asylum provision of some kind, it could have worked well. There are a lot of ifs.

It seems to me that the asylum hospital closure programme was, in many respects, done very hastily and the care provision has been, in many areas, grossly insufficient, driven by an ease of self-reliance. People have found themselves in a combination of very attenuated services. (Mentally ill people need) a place where (they) feel safe, where (they) can just be, where (they’re) not going to be pushed out in ten days or ten weeks.

What was it like writing this book, reimagining events of nearly 25 years ago?

I enjoyed writing the book. It helped a lot that I am a historian. Although these are memories and personal re-imaginings, I brought a lot of the skills that I bring to any historical task. I had a lot of sources to work with because I kept a lot of personal journals.

There are many kinds of rememberings and there are some forms of memory that go too deep and which are more like a resurrection of the past situation, past feelings. I both consciously and subconsciously veered away from that.

It was and it wasn’t objective for me. I think that what was really interesting for me, is how it was experienced. I turned myself into a historical subject, a historical protagonist.

The narrative gathers momentum, which doesn’t mean you’re not trying to remember, but we remember stories and I was trying to make those stories more conscious and more available in a form that could be told to others.

I had a real concern when I started this that so much of what I went through would be absolutely incommunicable. And that was a struggle to try and find scenarios, moments in particular out of a long, long period of time, to try and choose angles, anecdotes or whatever that I thought would illuminate things for a reader. That was challenging.

In your prologue you write, “I could not remember the experiences described here until I began to forget them.” What did you mean?

I quote Charlotte Delbo on different kinds of memory and what she calls “deep memory”. In her case, this was triggered by imagining that she smelt concentration camp on her skin. The feelings associated with my experiences were terribly extreme, and I barely survived them at the time, and I do occasionally remember them in dreams. No one in their right mind, so to speak, would ever seek such experiences. Because they’re not immediate emotional states anymore they have faded and what I am left with is a story of what it was like to feel rather than a resurrection of feeling. There were only one or two moments when the shadow of those feelings kind of fell on me again. Had there been more I don’t think I would have been able to write the book.

What was the most disheartening thing you discovered while writing your book?

That’s easy: the current state of mental health services (in the UK). In a general sense people are really suffering right now. Specifically, I’m concerned about the marginalisation or virtual destruction of psychoanalytic psychotherapy provisions. As a clinician said to me the other day, it’s like a juggernaut running through services.

I am writing an intellectual history of solitude. I think it’s going to mostly focus on the 18th century. The writer who got me really fascinated in subjectivity was Jean Jacques Rousseau. Questions about the relation between psychology and history and how ideas about the self, and ideas about emotional life and how they change have been of interest to me for many years.