An interview with Amor Towles 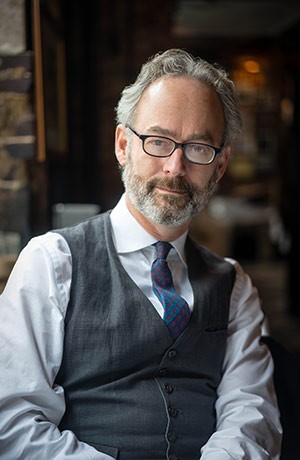 Amor Towles’s second novel, A Gentleman in Moscow, published in 2016, was on the New York Times’ bestseller list for over 40 weeks and is being made into a TV series starring Kenneth Branagh. Elena Bowes talks to the author about his inspiration, writing with humour and using the contours of history as a backdrop for character-led narrative.

In A Gentleman in Moscow, an aristocrat is sentenced to a lifetime in Moscow’s Metropol Hotel. How did that idea come to you?
I began writing fiction as a child; but when I moved to New York at the age of 25, I joined a friend who had started an investment firm, and 20 years later we were still working side-by-side. Over the two decades that I was in the business, I travelled a good deal for the firm—spending a week at a time in various hotels around the world. In 2009, while arriving at my hotel in Geneva (for the eighth year in a row), I recognized some of the people lingering in the lobby from the year before. It was as if they had never left. Upstairs in my room, I began playing with the idea of a novel in which a man is stuck in a grand hotel. Thinking that he should be there by force, rather than by choice, my mind immediately leapt to Russia—where house arrest has existed since the time of the Tsars. In the next few days, I sketched out most of the key events of A Gentleman in Moscow; over the next few years, I built a detailed outline; then in 2013, I retired from my day job and began writing the book.

How would you define a gentleman?
Better you should ask the Count.

Did you read any books that inspired you to write this one? And if so, which ones?
In my twenties, I fell in love with the writers of Russia’s golden age: Gogol, Turgenev, Tolstoy, Dostoevsky, Chekhov. Later, I discovered the wild, inventive, and self-assured writing styles of Russia’s early 20th century avant-garde, including the poet Mayakovsky, the dancer Nijinsky, the painter Malevich and the filmmaker Eisenstein. Going through those works, it began to seem like every accomplished artist in Russia had his own manifesto! From there, I became interested in the Soviet era admiring the works of Solzhenitsyn and Bulgakov. All of these works provided elements of inspiration.

Can you explain the parallel themes of your book to the film Casablanca with Humphrey Bogart? Was Casablanca a favorite film of yours growing up?
Casablanca was, indeed, a favorite film of my youth—though I don’t think that bears much comment. Just ask almost anyone who’s seen it! Early on, I had the notion that the Count and Osip would discuss the West by watching American movies (which were in fact watched by members of the Party during the Stalinist era). I quickly realised that Casablanca was an ideal movie to reference, in that it takes place in a space like the Metropol—an international oasis of liberty, music, and food in the midst of dangerous and oppressive times.

I loved your helpful aside advising western readers wary of Russian novels with all their different character names that they do not need to commit Prince Petrov’s name to memory. He will not appear again. Do you have any tips on writing with humor?
I’m afraid I don’t have much advice about humor, other than to use it very carefully. It’s easy to think you’re being funny, when in fact you’re spoiling the tone of your narrative… In the case of A Gentleman in Moscow, much of the humor was discovered through the writing and the personality of the Count. I suppose that the works of Gogol provided some guide as to how to use humor as a balance against the darker aspects of an era.

There is a lot of mouth-watering description about food and wine. Did that require a lot of research into the cuisine of the times?
I cook a good deal and most of the dishes in the book are from my repertoire. For those interested here is a link to the recipe for the Latvian stew that appears at the end of Book One with a brief essay by me.

The tales within the tales – I am picturing you having fun writing this book, getting carried away as you were in the midst of a scene. Was it like that or was it more hard slog? Or both?
It certainly wasn’t a slog. Having had a “day job” for 20 years full of meetings, stresses, and responsibilities, I find it a glorious luxury to be writing fiction full time alone in my library. I did have fun writing the book. But I generally revise my first draft three times from beginning to end, and that is not an idle pleasure. It is a long, demanding (and rewarding) task of craftsmanship.

There are scenes in your book that seem so accurate but then I had to remind myself, this is historical fiction, like the state dinner in 1954 with the then General Secretary Krushchev. Is that vivid scene, and others using real people, partly based on fact?
I don’t think of myself as writer of “Historical Fiction”. I think of myself as a novelist. I am interested in using the contours of history as a backdrop for a narrative that is principally about characters, how they interact and evolve. In essence, I like to mix glimpses of history with flights of fancy until the reader isn’t exactly sure of what’s real and what isn’t. For instance, the launch of the world’s first nuclear power plant in Russia in 1954 is an historical fact, but the assembly in the hotel of the Politburo to observe the blacking-out of the city is an invention. Similarly, the little brass plaques on the bottom of antiques designating them as the property of the People are a fact, while the stripping of wine labels is a fiction. And while purple lilacs abound around the Kremlin, as far as I know there are no beehives on the Metropol’s roof.

Your characters are so well-depicted. Do you have them clear in your mind before you start writing chapter one?
My process for writing A Gentleman in Moscow was very similar to my process for writing Rules of Civility. In both cases, I designed the book over a period of years—ultimately generating an outline which detailed the settings, events, and interactions of characters, as well as the evolution of personalities and themes chapter by chapter. Once I’m ready to start writing, my goal is to complete the first draft in a relatively short period of time. Thus, I wrote the first draft of Rules of Civility in a year and the first draft of A Gentleman in Moscowin eighteen months. In both cases, I then revised from beginning to end three times.

Can you describe the accordion structure you used for this novel, and why you chose it?
A Gentleman in Moscow has a somewhat unusual structure. From the day of the Count’s house arrest, the chapters advance by a doubling principal depicting the events one day after arrest, two days after, five days, ten days, three weeks, six weeks, three months, six months, one year, two years, four years, eight years, and sixteen years later to the day. At this midpoint, a halving principal is initiated with the narrative leaping to eight years later, four years, two years—right down to ten days, five days, two days, one day.

Hopefully, the mathematical aspect of the book’s form is virtually invisible to readers. That said, I think it suits the story well because readers get a very granular description of the early days of the Count’s confinement; then they get to leap across time through eras defined by career, relationships, and changes in the political landscape; finally, they get a reversion to urgent granularity as the story approaches its incredibly exciting conclusion!

This book would make a great film. Is that in the planning?
The book is being made into an 8-10-hour television series starring Kenneth Branagh as the Count.

How is your latest novel coming along? Is it a big departure from A Gentleman in Moscow and your previous novel, Rules of Civility?
I just recently started my new novel, which will be different in time, place and tone than my last two books.