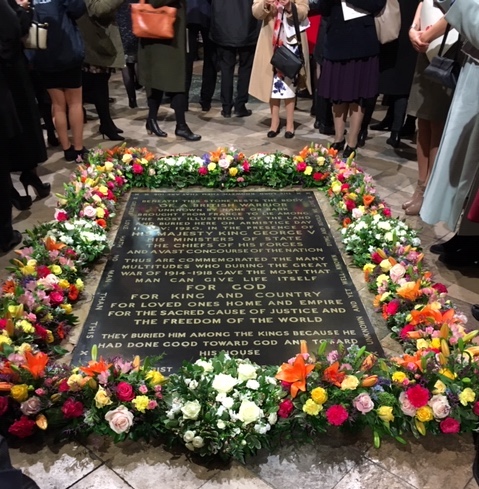 After a visit to Westminster Abbey, John Simmons shares his reflections from Armistice Day and 26’s most ambitious project to date.

So it ended. It ended, as it had begun, with a range of sometimes conflicting emotions. Angus Grundy’s first centena, about Archduke Ferdinand’s chauffeur taking the wrong turning, had led the way in August. A sort of Balkan ‘doh!’ followed by the realisation of the tragedy about to unfold. In the four years that followed millions died and the chauffeur’s wrong turn seemed to express the farcical but tragic failure of a world war.

So for 100 days after that first post we read daily stories about those who had played a part, sometimes grand, sometimes small, in a war that changed the way we look at the world.

The service was about remembrance and we sat there remembering. I remembered my grandparents, whom I had written about; I realised that my Nan would have been proud to be part of this display of national and international commemoration.

I remembered my family as we all remembered our families that day, whether or not there was a direct connection to the war. We are all connected. I remembered my Nan, flanked in the order of centenas by Gandhi and Elsie Inglis. I remembered other connections of the ordinary and the extraordinary, of people who fought or would not fight, of many different nations, from Britain and Ireland, the USA, Canada, South Africa, India, Australia, New Zealand, Jamaica, Guyana, Serbia, Austria, Germany.

And then the last post, and the final sight to take in as we left the Abbey, the Unknown Warrior. We filed past his tomb and later we read Faye Sharpe’s centena. In the end we had revived the memory of those whose names we had brought before the world again – but we could not give names or memory to so many. That is the waste of war, lest we forget.

The Unknown Warrior
by Faye Sharpe

Known unto God.
Whose face was this?
A face with numberless names,
as many as the frozen tears of winter’s first winds.
Conscripted from the grave to do my duty forever more,
I guard the crater in every human heart left by darlings disappeared;
that crypt smothered by the world’s grief, gratitude and regret.
I am the changing yet constant story found in the flicker of a candle’s flame,
a story that erupts from the tomb to scald sleep.
I remain to be remembered, to prick your eyes and conscience. Peace!
Whose face was this?
A face known unto God.