26 Treasures took us on the most amazing journey. It started at London’s Victoria & Albert Museum in autumn 2010. 26 writers were paired with 26 objects from the V&A’s British galleries to write exactly 62 words in response to each object. The exhibition was a great success and a new literary form was born – we named it the sestude, a reflective study in exactly 62 words.

We then took the idea to the National Library of Wales, the Ulster Museum and the National Museum of Scotland. Again writers were paired with objects and asked to write a sestude. The sestudes were displayed alongside the objects in the museums or as special exhibitions. In Northern Ireland each writer worked with a visual artist and in Wales there was also the Translation Challenge at the National Eistedfodd – won by one of the Welsh translations of a sestude written in English. 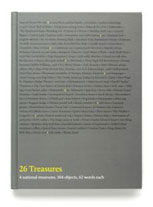 It now seemed we had more than enough material for a book. Four museums had taken part and more than a hundred writers. We approached Unbound, a new venture in publishing that uses crowd sourcing. When hundreds of people had subscribed to the book it was designed and printed (beautifully). The book is published in September 2012. Copies should then be available in bookshops, Amazon etc.

The 26 editorial team was John Simmons, Rob Self Pierson, Anita Holford, Gillian Colhoun, Sara Sheridan and Fiona Thompson, with a great contribution from Sally Baker in Wales. The book was designed by 26 member Sam Gray.