In the slippery world of tone of voice – like so many other places – context is all. Set the word ‘hello’ in 72pt Helvetica Extra Bold followed by an exclamation mark, and you’ll create a completely different takeout from the very same greeting peeping out in 9pt Baskerville. Design frames the words, creates the mood around them, and defines the universe they inhabit. 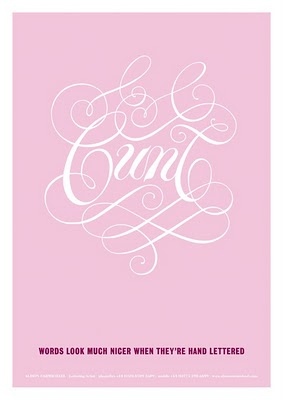 Designer Mark Denton’s ‘C**t’ poster for calligrapher Alison Carmichael (above) is a case in point. The lettering is so daintily beautiful, the baby-pink background so feminine, that the most offensive word in the language instantly loses its shock value. In the simple payoff ‘Words look much nicer when they’re hand lettered’, the audience is let in on the joke, we laugh at our squeamishness.

Similarly, cover versions of songs can completely subvert the meaning of the originals. This is most apparent in ‘easy listening’ versions of edgy rock classics likeMike Flowers’ Pops’ tongue-in-cheek cover of Oasis’ ‘Wonderwall’, and Paul Anka’s take on Nirvana’s ‘Smells Like Teen Spirit’. In a couple of crooned phrases, angst becomes kitsch, attitude becomes platitude. Extending the pop music analogy sheds plenty of light on the role of tone of voice in commercial writing. Take soul, probably my favourite genre of music. When you actually analyse the lyrics of a Stevie Wonder song (or a Marvin Gaye, Four Tops orAretha Franklin song, for that matter), they’re not much to get excited about. The words are almost inanely simple, the rhymes laboured, the sentiment clichéd. And yet, the songs still manage to be hugely powerful and moving. If they catch you at the right moment, they can make you cry, take you back to another time, make your spirits soar, or your body want to dance with joy. It’s all in the raw, visceral delivery… the grunts, groans, screams and moans are just as important as the words.

Don’t get me wrong, I’m not saying that the lyrics don’t matter. It’s just that in soul music, the connection happens at a gut level, not an intellectual one. Clever, stylised words would come across as contrived and calculated. Simple words speak of the man on the street opening his heart. There’s a lesson here for design too – bold graphics paired with pithy, direct writing can be really powerful, particularly when tackling serious issues. Eschewing verbal spin and dispensing with visual frills gets you straight to the nub.

But being a writer, of course I’m also a sucker for a bit of wordplay and storytelling. While I certainly admire serious heavyweights like Bob Dylan and John Lennon, who take on big issues with a poet’s eye, I generally prefer the wry detachment of Roxy Music or Franz Ferdinand. They take the position of observers commenting on what’s going on around them, steadfastly cool and detached. Oddly, this is totally the opposite of what I love about soul music, which is all intensity and involvement.

Then there are bands like Squeeze and their New Jersey heirs Fountains of Wayne, who cleverly capture small slices of everyday life in charming three-minute cameos, told from different character perspectives. And the likes of Elvis Costello and Jarvis Cocker, prone to verbal gymnastics perhaps, but still devastating with rhyme and metaphor, summoning injustice, absurdity, pathos, and everything in between.

But for me, the true master of the sung poem is undoubtedly Stephen Patrick Morrissey. His opening lines are lessons in observation, wit and originality – you’re hooked from the very start…

Of course there are many worthy pretenders. Neil Hannon of the Divine Comedy is another clever songwriter with a gift for setting a scene and skilfully unfolding a story. His latest single ‘At the Indie Disco’, is a winning comic tale of socially awkward, spiky haired adolescents looking for love on a Thursday evening. He even cites the aforementioned Moz.

The way he weaves in song titles and band names into the lyrical structure is seriously impressive.

…and we can all relate to going home alone on the night bus, waiting for next week’s reprise. Check the graphic/typographic vibe of the vid below… and dig Neil’s dancing!

This is exactly the kind of gently observational, mildly amusing tone of voice I am trying to achieve in my commercial writing. But I’d like to think there’s some soul lurking in there as well. Huuuuuh! Get up offa that thing! Uhh!