A week with Dark Angels 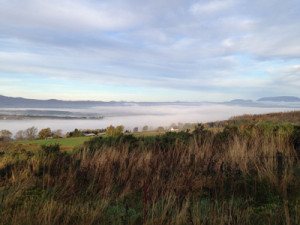 Sophie Gordon was one of two young 26 members to be awarded a Dark Angels scholarship following a competition in the 26 newsletter. Last month, she went off to Monicak Mohor in Inverness-shire to attend the Dark Angels Foundation Course. Here Sophie tells us about finding her own pair of writing wings.

Since I got back from my stay at Moniack Mhor, a lot of people have been asking me about it. What did you learn? What did you write? What were the other people like? What then follows is my desperate attempt to answer their casual questions without seeming like a gushing fanatic.

Because here’s the thing – I loved every bit of it.

To keep this brief, and keep the fangirling to a minimum, I’ll stick with those three questions. After all, it’s one of the first things I learned – constraints liberate.

Over the course of the week, our tutors Jamie Jauncey and Stuart Delves set us exercises with constraints. Sometimes it would be time. Fifteen minutes to write this, five to write that. It might be the subject. Or the form – a paragraph, a poem, a sentence. We even took it in turns stabbing a dictionary to find a random word as a starting point. These constraints freed us up in other ways – opening up our minds and forcing us to problem solve.

I also learnt to silence my inner critic. Even in the stillness of the Highlands, I could barely make out a whisper.

What did I write? It felt like a lot – from a haiku to a business plan – and it felt good doing it. I wrote about things I cared about. And I wrote it in my own voice.

What were the people like? Well, they weren’t just people. They were Dark Angels.

Jamie and Stuart were the most patient and inspiring tutors I could have hoped for. My fellow writers managed to have me in stitches one minute, and in awe the next. And I’m happy to say I count every one of them as a new friend. It’s thanks to them that I returned to my desk the following Monday brimming with ideas and buoyant with confidence. Almost like I had my own pair of wings…

Before I wrap this up, allow me just a moment of gushing fanaticism. I’ll keep it brief. But I couldn’t write this without mentioning: the food, the misty mornings, the hobbit house, the music, the roaring fires, the whistling winds, the feeling of pen on paper and a collie called Cashew.

It’s been about a month now, but the Dark Angels effect hasn’t worn off. I’m still flying. And that pesky inner critic? I can tell he’s still there, but weaker. His voice muffled, hands tied. Constraints liberate.