As 2007 draws to a close, 26 members name their most memorable piece of writing of the year. (That’s as in memorably good, or memorably bad.) 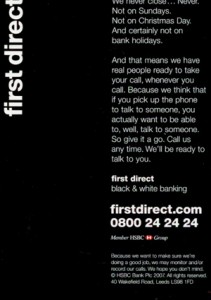 I scanned this ad from the Guardian recently. I love it, not just because it reads nicely. And quickly. I love it because it takes a theme, then weaves a bunch of ‘benefits’ into it without it becoming the hotch potch clients usually try to force on you, saying “oh, but we’ve got to say that, and this, and…”. 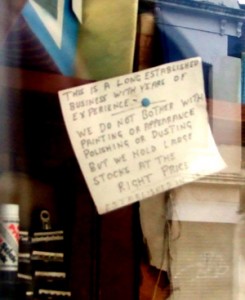 Text reads: “THIS IS A LONG ESTABLISHED BUSINESS WITH YEARS OF EXPERIENCE. WE DO NOT BOTHER WITH PAINTING OR APPEARANCE, POLISHING OR DUSTING, BUT WE HOLD LARGE STOCKS AT THE RIGHT PRICE.”

I don’t feel the need to say anything about it other than it is a shop on the Roman Road.

John Simmons
The most memorable bit of writing I’ve come across this year was a line from Shakespeare’s King Lear spoken by Ian McKellen playing Lear in the RSC production. Lear is dying, having held his dead daughter Cordelia in his arms, and he speaks this line;

It was heartbreaking, each speaking of the same repeated word opening up new possibilities for meaning. One simple word can be made to mean so much. I’ll never forget hearing those words spoken.

Roger Horberry
My nomination is a Peugeot 407 print ad currently doing the rounds in the colour supplements. It’s a double page job – the left side is a complex flow diagram detailing the sort of tortuous mental process a potential 407 buyer might go through before whipping out his/her cheque book; the right is simply a shot of the car itself. Implication: one look is enough to make a decision and silence any internal debate. Genius.

A couple of hardy perennials…

In case you don’t know it, Howies is a clothing company trading from Cardigan Bay in Wales, which tries to make a difference. From the inspirational catalogue (which I always keep), to the occasional short-but-sweet emails, to the labels in the jeans, Howies speaks simply, truthfully and occasionally playfully. You can’t fault it. The secret of Howies’ writing is it doesn’t try to hard. Even to sell you stuff. The tone of voice is never too jokey or too worthy – always right on the button.

Word magazine (subtitle ‘Intelligent life on planet rock’) has a wonderfully self-deprecating tone and a penchant for music-based wordplay. I’m constantly amused and impressed by the sweet turns of phrase and consistent standard of writing. As a subscriber, I get a short monthly letter from the publisher (along with the magazine and a superb compilation CD) – even this unassuming piece of white A4 is wryly amusing and beautifully honed.

Not that I’m looking for gainful employment, you understand… but I happened upon a job ad for a senior copywriter on www.mad.co.uk the other week, which had an it’s instead of an its, and kept slipping into different tenses and persons – one minute it was ‘we are looking for’, the next it was ‘they are looking for’. A humble recruitment consultant might be an easy target, but there seemed a certain irony given the context of the ad.

‘4 in five new jobs go to migrants’; ‘Freed early to murder’; ‘How much worse can it get?’; ‘Diana: five lovers named’; ‘Illegal immigrants: the home office cover up’; ‘Rapists who can laugh at the law’; ‘The migrant jobs fiasco’. Yes… it’s the Daily Mail.

Amanda Folkes
This one is from The Four Seasons at Langkawi in Malaysia. For me, it perfectly summed up the lovely approach of the hotel and the people who worked there. It was a small sign delivered with room service trays, which were typically set up al fresco.

‘Our resident monkeys are very cute. However, we would appreciate it if you’d try your best not to feed them.’

I liked it as they could have just written ‘Do not feed the monkeys’ but that wouldn’t have been quite the same, and for me this was a rare example of brevity not always being the best approach. I also felt that taking a more engaging tone made the reader far more likely to comply, and I personally did not feed the monkeys, despite their cuteness!

Mike Reed
This isn’t exactly hot off the presses, but my most memorable read of 2007 wasGreat Expectations. It’s long been a source of shame that I haven’t read a Dickens novel. I blame the fact that we were told to read David Copperfield in about the second year at school, and given dense, dusty old black copies of the book written in fine, tiny type on thin, whispery pages. Having read Great Expectations at last, my shame has turned to frustration – why has it taken this long? A cracking story, peopled with beautifully drawn and memorable characters, there’s nothing remotely fusty or difficult about Dickens. (Which comes as no news at all to most, I imagine.) Pip himself, the hero of the book, is a friend for life: alive, complex, passionate and deeply flawed (of course – his flaw is the heart of the book). Wonderful, wonderful stuff. 2008 will see my shelves gradually filling with Dickens.

John Simmons
Here’s a late entry from the President himself, with a strong supporting cast. This really has to be seen to be believed.