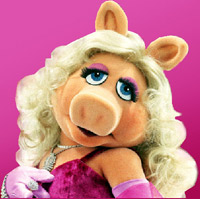 Well-known sage Miss Piggy never eats more than she can lift. Before PD James, Elmore Leonard said if it sounds like writing I rewrite it. (Thanks for those who pointed it out.) Here’s a collection of our favourite writing advice.

My best writing advice is from Raymond Chandler. Paraphrased: If the narrative drive of your story is too slow, write a man coming into the room with a gun. Just the thing for his particular brand of crime noir but easily adaptable to whatever genre you’re writing in. In chick lit the man with the gun becomes an attractive member of the opposite sex blundering across your path, for example.

Also, you can get someone else to fix your lousy spelling and grammar (if need be), when it comes to writing the only thing that matters is to be compelling. If you’re going to write, someone has to want to read it. Better – someone has to be prepared to stay up late reading it. Someone has to miss their bus because they couldn’t bear to put it down. And that’s down to the double whammy of narrative drive and narrative voice. People get caught up proofing pieces but it’s getting the construction right that makes the difference… nail that and you’ll always have an audience for your work.

The Graham Greene, ‘kill your darlings’ is pretty good. But the one that gets right to it is Hemingway’s ‘writing is rewriting’. No first draft is ever spot on no matter how good you are.

Less is more. I try (and typically fail) to adhere to The Elements of Style by Strunk & White. Specifically, I omit needless words, in the same way that ‘a drawing should have no unnecessary lines and a machine no unnecessary parts.’ I write, read, cut, re-read, cut. Begin again. Or at least, that’s the plan. As the book says, ‘This requires not that the writer make all his sentences short…but that every word tell.’

I also like writer John McPhee’s tip in a recent New Yorker article. He uses a dictionary to look up words he ALREADY knows. Why? ‘The dictionary not only gives you a list of synonyms, it also gives you a deeper understanding of the meaning of the word, and sometimes the definition can lead you to a better way of phrasing altogether.’

James Baldwin said, ‘My first drafts are overwritten. Most of the rewrite is cleaning. Don’t describe it, show it. You want to write a sentence that is clean as a bone. That is the goal.’

Brilliant. I know this is a familiar theme – paring, editing, rinsing, but I’ve not seen it better expressed than this.

I also like Sir Peter Medawar: ‘People who write obscurely are either unskilled or up to mischief.’

‘Here’s a review I did on David Schneider’s writing tips and the Curious Incident.‘

Bernice Rubens once said to a group I was in: ‘Write about what frightens you.’ Not an easy road but a wonderful insight into emotional electricity.

Here’s a nice link on writing advice from authors. My favourite is Raymond Carver’s.

It’s from a copywriter about copywriting – Howard Gossage said ‘People don’t read ads, they read what interests them. Sometimes that’s an ad.’