Three ways to… settle into a new job

Rishi Dastidar started a new job this month. He’s joined onefinestay as head of brand. But, even when you start in a company as head of something, there are still first day nerves to contend with. Here are Rishi’s three ways to settle into a new job. 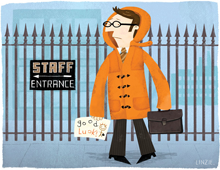 So, this month, I started a new job, for the first time in nearly six years. Suffice to say, that’s a long time since I suffered from first day nerves, and plenty of time to have forgotten any new joiner etiquette I might have ever learnt.

It has been a busy few weeks since, and I have felt mostly like the proverbial swan; the amount of pedalling I’ve been doing below the surface could have easily powered me to victory in a stage of the Tour de France. What has helped? Three things in the main:

1. Smiling. No, really, it has. Obvious as it may sound, but beaming – not in a psychotic way – has helped to break the ice when meeting new colleagues. As has…

2. Silence. Or, rather, listening when other people are talking. Because, unsurprisingly enough, if you ask the right question about what someone is doing, they’re more than willing to tell you about it. And within what they say will always be a nugget that helps you do what you have to do.

3. Show willing. Yes, of course you’ve been hired to do a certain something. But it’s amazing how much people appreciate an extra pair of hands, for whatever task it might be. Even if (especially if) it’s doing the first tea/coffee/beverage run.