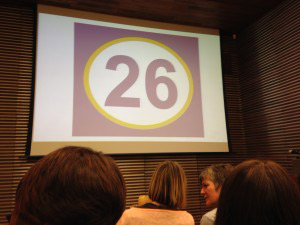 On Saturday I went off to Wordstock, 26’s annual festival of words at the Free Word Centre. This year we had a particular cause for celebration – 26’s tenth anniversary. Extraordinary how much 26 has achieved in that time. And strange to think that when we began 26 – “Crazy kids just following a dream” (Leonard Cohen) – there was no sign yet of Facebook or Twitter. How the world has changed in a decade, and I’m proud that 26 has contributed much to that changed landscape for writers.

Our original ambitions for 26 were limited: to recruit 26 people who would help the founding group of eight champion the cause of better writing in business and in life.

It wasn’t long before ambition grew. When we launched at the 2003 London Design Festival, we attracted an audience that became a membership of more than 70 by the end of the evening, each paying £26 annual subscription. So we were away.

We attracted writers of every possible kind: freelance copywriters, in-house language managers, directors of HR and marketing, journalists, brand consultants. Then, drawn in by our eclectic projects, we recruited published poets and writers of fiction, and discovered that many of the business writers were also working on books of different kinds. It became a rich mix, and has continued that way.

Our projects were unusual, bringing us into working relationships with interesting partners. Our first outing combined the skills of 26 writers with typographers from the International Society of Typographic Designers. Each pair – writer + designer – was assigned a letter of the alphabet (our name comes from the number of letters in the English alphabet). The results of this collaboration were exhibited at the British Library with an accompanying book.

From Here to Here, based on the Circle Line, and a partnership with London Underground’s Platform for Art, led to tube posters and a book. 26 Malts, with the Scotch Malt Whisky Society, created unique labels for single malt whiskies.

There’s an art in choosing the right project and partner, which has become easier as we’ve developed a track record. From the point of view of our members, the projects offer the opportunity to flex creative muscles in unusual situations. For our partners, the projects offer a quality of work and unexpected insights through the written word. Which all reinforces our original mission.

It is a strength, and perhaps a surprise to other creative organisations, that 26 has prospered by being inclusive rather than exclusive. We’ve had little interest in becoming a trade association for business writers. We are writers with no narrow definitions applied.

In the last year or two we’ve been active across the UK. Starting in London with the V&A, 26 Treasures spread to the National Museum of Scotland, the National Library of Wales and the Ulster Museum. We invented a new literary form, the sestude (62 words exactly, ‘26 in reflection’) and 26 writers produced sestudes about objects in each of those museums. Our list of more than a hundred writers included Alexander McCall Smith, Gillian Clarke, Andrew Motion, Michael Longley and Paul Muldoon. Last week, the book 26 Treasures won the British Book Design and Production award in the Literature category – congratulations as well to designer Sam Gray and publishers Unbound.

This year we worked with Norwich, newly awarded City of Literature status by UNESCO. The project paired 26 contemporary writers with 26 from Norwich’s past, including Julian of Norwich, John Skelton, Elizabeth Fry, William Godwin and WG Sebald. The responses, as varied as the original writers, can be seen on a website together with work by UEA creative writing students.

One lesson we’ve learned is to aim high and not be deterred by the tendency to pigeonhole. Writers are flexible creatures who love fresh challenges – we’ve provided plenty of them.

A second lesson is to be open and optimistic. There’s a joy in writing as an activity that can be squeezed out by factions. We’ve always been determined to welcome people in, not keep them out.

The third lesson is that you have to keep moving forward. We always have several projects on the go – we have hungry writers to feed. Don’t wait for one thing to finish before beginning the next.

Our annual showcase is Wordstock, a one-day festival at London’s Free Word Centre. This year we had author Kate Mosse talking about writing short stories, and guru of British independent films David Parfitt received big-screen pitches live on the day. And I was delighted to announce a new project with Oxford’s Story Museum. We keep moving forward.