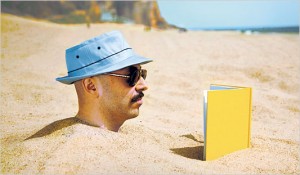 I like taking books from the places I visit when I go on holiday. This summer it’s Yorkshire so I’ll be re-reading Ted Hughes’s poetry collection Birthday Letters again. I won’t read Wuthering Heights again because I don’t want to dent the massive impact it made on me when I read it as as teenager. So instead, I’ll be digging into the growing pile of unread books by my bed – Crow Country by Mark Cocker, Little Red Chairs by Edna O’Brien and Revelation by CJ Sansom.

I’ll definitely be packing The Bridge Ladies, a memoir by Betsy Lerner about her mother and her weekly bridge game that continued for 50 years. Lerner’s take on the women at the card table changes as Lerner grows up from fascinated child, to cynical teenager to working woman. When Lerner’s husband gets transferred back to Lerner’s hometown she gets thrown back in time and gains a whole new respect for her mother’s weekly bridge group. As the book flap says, social media may connect us across the globe, but it “can’t deliver a pot roast and it won’t dry your tears.”

Also in my beach bag will be Vinegar Girl by Anne Tyler. The Pulitzer-winning writer takes Shakespeare’s Taming of the Shrew to modern day Baltimore, same city where gritty TV series The Wire was filmed.

The Surprise of Cremona by Edith Templeton

If it’s Italy, it has to be Edith Templeton. Her tales of travelling alone through 1950s Italy are a masterclass in cliche free travel writing: evocative, informative and bone dry witty. She’s idiosyncratic, she’s opinionated, she drinks a lot of red wine. She’s got to be the perfect travelling companion.

This year, we are holidaying in God’s Own Country. So it would be hugely remiss not to plug a few holes and read a couple of the Yorkshire classics that have escaped me so far. Top of the list will be The Tenant of Wildfell Hall, by Ann Bronte, and one of the first feminist classics in English literature. And I may also read A Month in the Country by J.L. Carr, which I never had thought I’d bother with, but had my mind changed by listening to a most excellent podcast on this book. So if I can combine my holiday book with a recommendation for this month, the Backlisted podcast, which is available for free on iTunes, features 26er and founder of Unbound, John MItchinson, in conversation with one of the stars of last year’s Wordstock, Andy Miller. A Month in the Country was their first outing, and it’s a richly enjoyable listen.