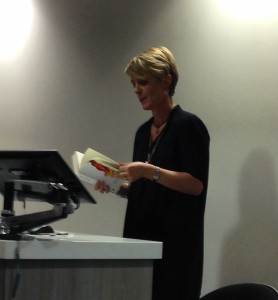 What does it take to craft a pacey psychological thriller? As a finalist in the People’s Prize for Fiction and the Beryl Bainbridge first novel award, Susan Lynes knows a thing or two on the subject. This month, Elena Bowes talks to Susan about the inspiration and obstacles behind her novel, Valentina.

I write novels and short stories, I teach creative writing at Richmond Adult Community College and I am married with three kids. I counted these words.

Valentina is a great story. How did you plan the structure of your psychological thriller?

Thank you very much – thumbs up and smiley face emojis à go-go.

I didn’t plan the structure too tightly. I knew what the reversal (the reveal) was going to be, I knew at that point I would hand over to the other woman’s point of view and I knew how it would end, loosely. I knew I wanted two strong women but that one of them would be laid low by circumstance. Apart from that, the novel evolved and developed complications as it went on.

Which were the biggest obstacles in crafting Valentina?

The first obstacle was getting to the inciting incident quickly enough because there are effectively two due to the inaccuracy of perception on the part of Shona, the central character. Her inciting incident is meeting Valentina. But of course, it is meeting Mikey – when she meets him she is already on that journey. So I had to try and somehow get both things to happen on the page within a reasonably short space of reading time.

The second obstacle was that I had no idea how or why Valentina would agree to do what she does, given the type of person she is. Her epiphany was my epiphany and yes, it came in the dead of night when my subconscious was hard at work.

Finally, getting the whole thing to hang together was a nightmare, like trying to plug several leaks with one thumb.

Your first novel is gripping. I read it all in one go. Did you read thrillers like ‘Gone Girl’ to understand how to build suspense? And if so, which books helped you the most and why?

I read Before I Go to Sleep, The Girl on the Train and Gone Girl. I read the top drawer big hitters and noticed that the list of characters is short, which results in a more intense read.

Before I Go to Sleep relies on a simple, elegant premise. The Girl on the Train uses alcoholism as a very effective fatal flaw. Both are tightly constructed narratives, both use memory loss, and both have a rhythm to them: daily amnesia and a train commute respectively. But it was Gone Girl that blew me away. I loved the quality of the writing, the humour, the sassiness. I didn’t like the plot as I felt it descended into silliness but I loved the courage of writing such a heinous anti-heroine – she betrays everyone but most of all her own sex and that felt like real violence. So yes, I was influenced. I wanted to write a claustrophobic, atmospheric story. I wanted the courage and sass of Gone Girl but I wanted a simple, elegant plot, and an anti-heroine who provokes conflicting feelings in the reader.

The women characters directly address the reader. Can you tell us why you did that?

As part of my background reading, I read David Copperfield and Jane Eyre. I read Dickens to figure out how to write a retrospective narrative which holds a degree of hindsight – when do you leak that hindsight into the story and when do you commit to the action of the scene? How often, in other words, do you let your narrator, in the here and now, break into the past? I read parts of Jane Eyre due to similar elements in the tale and found that Jane Eyre addresses the reader directly, which I find exciting in terms of a reading experience. (I need to get out more, I realise.)

As facts became revealed I found myself flipping back to earlier sections to reread what was said at the time. Planting clues: how did you pace them, what was your thinking?

Ha, yes, my husband enjoyed the second reading more than the first due to those clues. Some of the clues were in from the start, some clues I took out because they gave too much away and some were added later. More than anything, I wanted Shona’s conclusions to be perfectly reasonable, given her love for Mikey. The whole novel was built like a rickety shed and I then had to go round knocking nails in to get it to stand up properly.

I see you lived in Aberdeen, how much of your novel is based on personal experience? Did you ever know someone like Valentina?

Obviously, I used the Aberdeenshire countryside, the granite of the city, the beach looking out onto the North Sea. Shona’s experiences of being in the newspaper office in Glasgow come from my own experiences of working at the BBC in Aberdeen. Jeanie was based on my late friend and mentor, Jean, who was a journalist and a person of great generosity, integrity and loyalty – the book is dedicated to her.

I also have experience of loneliness, having travelled around for my husband’s job and found myself in new places with no work and no friends. I have had children and so have experience of the bewilderment, loss of identity, and the excoriating effects of prolonged sleep deprivation. The cottage in the woods is really a metaphor for all of that.

I have never known anyone quite like Valentina but of course there are elements of her in people I have known, including myself. I have had friends who have had affairs and friends who have been the victim of affairs. But what I needed was a psychopath. I read up on psychopathy and found that actually the only real thing that defines a psychopath is a lack of empathy. In other words, I could write a really fun character but remove this one thing and she would be able to perform as I needed her to. More than anything I wanted Valentina to be funny, a bit camp, sexually fluid and – no matter how wicked she was – I wanted the reader to quite like her in the end. But of course I have no control over that.

How did you map out the book’s plot, and what tips would you give aspiring writers on plot?

I didn’t. I wrote it chapter by chapter, with the plot loosely in my mind. I am not a classic thriller writer in that sense. I think if I had it all plotted out, I would kill it for myself. So I have no tips on plotting other than to say that there has to be cohesion of plot and character. There has to be authenticity. Your characters can behave one way one minute, another the next, but the reader has to be able to trace that psychological thread. Shona goes from strength to weakness and back to strength – but at all times her strength or weakness has to be real.

What does “Valentina” say about love and relationships and losing yourself?

I think what Valentina says about love is that if you have been loved growing up and you love someone in your adult life, whether that is platonically or romantically, it does not occur to you not to trust them. I think it says that of all the violations, perhaps the violation of trust is the worst – hence the reference to Swift’s houyhnhnms.

I didn’t write this book as a warning against trusting people. Love and trust are what make life worth living. But this is a psychological thriller and so what we know, the best of what we know, must be subverted to create drama otherwise it would be lovely but… ah, yawn… zzzzzz.

In terms of writing a thriller, is there anything you made sure to avoid?

I didn’t want a man chasing a woman with an axe or similar at the end. I didn’t want a high body count. I didn’t want anyone having a personality change just to suit the needs of the genre. And, in terms of revenge, I tried to avoid any feeling of victory. Revenge comes at a great price. It is better, always better, to walk away – though not in fiction!

I cook a lot for my family and friends, who are a great source of fun and strength. I like to go out for walks and to the pub and catch up with friends that way too. I love my writing group and love my meetings with them. I like to go to the cinema and the theatre. I like going out for dinner. I like to stay in all cosy and watch crap telly or a film with my husband and the kids. I have just created an Instagram account called dogsdobooks, which is my dog Lola re-enacting works of literature. As you do.

I am getting towards the end of the first draft of another book, with the working title of Rope. Valentina has been described as a ‘book club page turner’ – so that is what I’m attempting again – with plenty of psychological darkness.