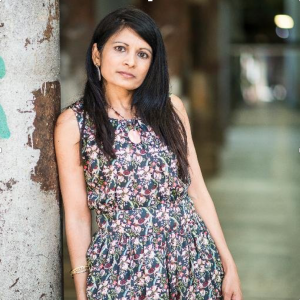 Michelle Cahill, a Goan-Anglo-Indian writer who lives in Sydney, talks to Elena Bowes about her first collection of short stories, Letter to Pessoa.

I seem to be irretrievably immersed in a parallel universe, while tending to my family or to the needs of my body…

Your first work of fiction, Letter to Pessoa is comprised of short stories interspersed with literary letters to amongst others, Virginia Woolf, Derrida, Nabokov, Coetzee, Borges, Neil Young, Philip Larkin and your book’s namesake Fernando Pessoa. Can you explain your thinking behind this original structure and the list of authors selected?

It began as an experiment in lyrical prose fiction in the second person with ‘Letter to Derrida’, a love letter with a philosophical twist (I admire the politics and anarchy in Derrida’s deconstructionist writings — they speak to me as a migrant writer.) The second person voice is very intimate and playful since it implies more than one reader: the real reader and Derrida.

So these are conversations with writers whom I have admired and at the same time they tell a story, sometimes fictional and sometimes part of my life. I began to experiment further with the metafictional letter in ‘Letter to John Coetzee’ which interrupts how Melanie Isaacs is portrayed in the novel Disgrace. I wrote ‘Chasing Nabokov’ many years ago, as a love letter to Nabokov, whose poetic, virtuosic style I’ve always admired. It took me many years to write.

Some stories are not letters at all but stories about characters who are heteronyms, or other selves. Letter to Pessoa is the ultimate homage, to the Portuguese poet and translator who wrote in over 50 heteronyms. He wrote in fragments, and he did not publish a prose book in his life time; I feel an affinity to him, since I have also had to be a fragment in my ‘true story.’

Do you think your readers need to be familiar with the works of these authors to fully appreciate Letter to Pessoa?

The writers I address are well known, but for readers who are not familiar with them the letters provide reference points to do a little Google research, or go to the library and borrow. But the stories stand on their own, and the writing is accessible, because that has always been important to me.

I am not an elitist writer, even where I have chosen more abstract and sometimes theoretical subjects. The books I reference are so vivid to me so I hope readers enter these textual territories, where authors speak to each other without feeling intimidated. The trick is to trust the writing…just go with where the images and words take you and don’t worry about meanings that may seem obscure. This is a book about reading and writing.

Your stories have a surreal, dreamlike quality about them. How do you achieve this surreal tone?

I guess the voice has a musical and compositional texture which carries contingent, sometimes surreal or serendipitous experiences because for the exile, for the migrant or the marginal person, identity and home are not stable and fixed. Writers like Pessoa, Borges and Derrida were exiles of a kind: they moved between countries and cultures as I have done. I wanted the fragment to be phenomenal; I wanted to imbue the dream life with its own aesthetics.

You are a poet so it makes sense that your stories are suffused with poetry, images and phrases that made me pause just for their sheer sparse beauty. Do you read your work aloud, or do you have any tips on how writers can achieve such poetry in their prose?

My advice is to not be satisfied with mechanical writing. For me it was important to trust my imagination; the fear of failure is what limits us as writers. I would say let yourself plunge into writing so that you lose yourself; read other writers and be prepared to experiment.

I read that your favourite short story is Connecticut by Andrew Porter. What is it that you love about this story?

Porter so beautifully controls the very deep emotions swirling through this story of suburban marriage, privilege and heteronormativity as it moves to the brink of catastrophe. The filial and spatial relationships are powerfully defined: neighbours, spouses, parents. It feels as if there is an emotional world and a lifetime captured in mere pages.

A common theme that threads through your stories is a feeling of displacement, not belonging and homelessness. You have said “Our lives are fragments.” How has your personal experience influenced your writing?

Well, apart from travelling and living in different countries I have experienced a Buddhist appreciation of life and the mind, which accepts the impermanence of thoughts, memories, emotions, ideas as mental constructions which are fragmentary. Buddhism is deconstructionist. If you understand something rationally it can change the way you experience life. But also having twice emigrated and feeling the economic and cultural pressures of that experience, homelessness is a state familiar to me. These days, even with Australian citizenship, I need to travel as a writer between countries. Being transnational, inevitably, I am at the interstices.

Have you been to all these places you describe so vividly? Or do you just have a wonderful imagination? Or both?

Travel and research helps; technology can transport me to different worlds. I do a lot of research but the best preparation is to be in another place. I have travelled in Spain, Portugal, parts of the US, and in Asia as evidenced by ‘Duende’, ‘Disappearing’ and ‘The Sadhu.’ Books are also places and some of my letters travel through textual worlds.

The characters in your short stories are wide-ranging from a cat to a dying gay man to a modern-day Lolita to many others. How do you make these different characters so believable? And which character was the hardest to inhabit?

It was challenging to write ‘Biscuit’ and to inhabit the world as experienced by Crust, a cat, but it was also a thrill to finish writing that story. Crossing gender was not as difficult somehow as inhabiting the inner world of my mixed-ancestry Hindu heteronyms Sarita, Hemani and Nabina. As a Christian by birth and a Buddhist by belief, I was crossing caste in these characters, and so I had to be sensitive to validating the Hindu identity.

You write about sex, lust and the power plays between couples very convincingly. What advice would you give writers in tackling sex scenes and the subtle inter-play that occurs within couples?

Like all writing, I suggest avoiding clichés. Sex is emotional and powerful: the challenge is how to convey the vulnerability, control, coercion, and pleasure without sounding clichéd. You need to let go of your own hang-ups and defences to create original scenarios. If writing avoids taking these risks, it might be a safer undertaking but it is not electric; it is not convincing.

Writing poetry or prose? What do you enjoy most about writing in each form?

I love the concentrated space and the intensity that poetry can contain. I love the expansion, detail, verisimilitude and virtuosity that prose offers; the craft it demands.

Your website says you believe in four noble truths. What are they?

I am about to start writing a novel, which for some time I have been researching, so that is exciting. I can’t wait….