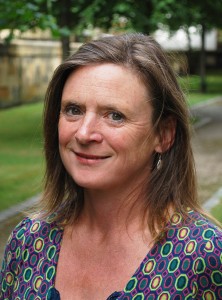 Our very own Linda Cracknell’s first nonfiction book, Doubling Back, is out in paperback. The award-winning novelist talks to Elena Bowes about how memories can shape landscape and why walking inspires writing.

Describe Doubling Back in 26 words

Doubling Back explores connections between landscape and memory, following ghosts of writers, a long-lost father, and saints across diverse paths from Alpine peaks to forest rambles.

The detail in Doubling Back is vivid and glorious. Did you take notes while you were walking?

I took brief notes, but enough so that I could write more fully at the end of each day. I also did sound recordings, took photographs, that kind of thing. And there was research involved as well.

How does walking promote writing?

Most writers, I think, are well aware of the value of walking – or some other kind of rhythmic, mechanical thing. I run workshops for aspiring writers and I always include a walk. When you’re in motion, you have a fantastic opportunity to observe your senses, to observe yourself and how your body feels in certain landscapes, but also to observe your thoughts. Thenaturalmotion of walking allows your imagination to roam and memories to surface.I think that’s why memory became a big theme in the book.

What inspired you to write the book?

Back in 2004, I was walking in Norway with friends whose father had made the same epic journey while trying to escape Norway during the Second World War. I was there because I was an experienced walker, whereas my friends were there because they were intimately connected to their father’s story. I came to understand that a walk could be about memories and resonances that former journeys have left on the landscape. In his case, we were very fortunate because my friends’ father had written about his journey. The journey had been kept in alive in the family’s memory and in the memories of people from Norway, some of who honoured the story by walking part of the route with us.

It struck me that the walk was very different from the walks I’d done in mountainous terrain, which were about getting away from people and getting to the tops of things. Now, I was much more interested in places that retained memory. So that’s what prompted me to think about other journeys that I could take that had either a collective memory or a personal memory.

The story about your father seems connected?

Yes, it came directly out of this. I thought, here I am walking as a memorial to someone else’s father when I know that my father was a very keen mountaineer. I thought that I should do something similar for him.

Are your walks solitary, social or a bit of both?

They can be both. I do like both. Although they’re extremely different. When walking on my own I get a great sense of refreshment and freedom, especially if it’s over a number of days. Whereas walking in a group, you get a sense of a community on the move – think Canterbury Tales. For people who don’t walk on their own, I think walking in a group is a powerful thing to do.

Do you ever get nervous walking alone?

I don’t find anything to be nervous about. I’m walking in reasonably remote areas where there aren’t enough people around so there’s no point in worrying about people. It’s very empowering – maybe particularly for woman – to take off and discover it’s not actually scary.

I pursued this a bit in the final chapter of my book about a local walk, which I do in a circle. The process of writing is circular. You write something, go back to the beginning, revise and you keep going round and round in circles. That process felt very similar to my local walk.

What is the hardest thing about being a writer?

I make a living by teaching workshops and doing residencies. I don’t make much money from writing books, just pocket money really. So probably the hardest thing is working out a way to balance teaching, which I do really love, with finding the personal space to write. I find achieving that balance kind of precarious. Every year I think, ‘have I got enough money?’

What advice can you give to aspiring novelists?

Make sure the world you create is going to sustain your fascination over several years. It will take a while to write it, but then after publication, you will want to relish speaking about it for a long time to come!

If you couldn’t walk, what would you do?

What’s next for you?

I’m in the very early stages of another novel. I’m also the writer in residence at a children’s hospital in Edinburgh. And I’m continuing to write about walking in Scotland for a website called Highlands

Get your copy of Doubling Back here.