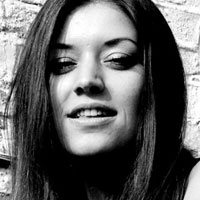 Kate Baxter, the 26er behind our new project, 26 Ghosts, talks to Elen Lewis about singing, secret crushes and the serious skill of writing a story that chills the blood.

I’m Communications Manager at ARK Schools, a charity that runs academies in the UK and also helps run schools in India and Uganda. I work with the rest of the Communications team to tell communities and potential staff about the work we do – that might be through marketing materials, digital campaigns or events.
However, I’ll soon be leaving to become a freelance writer. *Gulp* It’s a scary prospect, but it’s something I’ve been hankering to do for a while.

I sing. Lots. In the shower, in the kitchen. I’ve always loved music – it was my subject at university, and I started singing in little jazz groups while I was studying. I still do a bit now and then, although it tends to be for friends’ weddings and family birthday parties…

Not much. I’m a pretty open book. Some people hear my Burnley accent and assume that I’m a typical Northerner – but I always take a coat when I go out for a pie and a pint, so that’s clearly wrong.

I love getting involved in the projects, of course – they’re especially great because, although I enjoy writing fiction, I sometimes struggle to finish my own stories without a deadline snapping at my heels. But the best bit about belonging to 26 is meeting brilliant people with ideas that make you think: I wish I’d come up with that.

How would you describe what you do (in 26 words)

I read, I ponder, I wonder. I write, I doubt. I move some things about. I amend. But it usually turns out alright in the end.

What inspired you to launch the 26 Ghosts project?

I’ve always been a bit mad about ghost stories and general horror stuff. When I was about seven, I used to go to the video shop (remember those?) to pick a film to rent – the only section I ever looked at was the Horror section. I’d stand for ages looking at things like Friday the 13th and Poltergeist. And then I’d have to go and get my dad so that he could rent them for me, since I obviously wasn’t old enough to rent them myself. My parents told their friends that it was fine because I was mature enough to distinguish between fiction and reality – but I’d go to bed at night and lie awake for hours, petrified.
So, 26 Ghosts is a return to a childhood passion. It’s also something of a guilty pleasure – after all, ghost fiction isn’t always taken very seriously. But I think it’s actually an extraordinarily difficult genre to work in. Writing a great ghost story – one that really chills the blood – is a serious skill.

If I was to choose a novel, it might be The Haunting of Hill House – a story about a group of people thrown together when they visit an old mansion as part of an experiment into the supernatural. Obviously, things get a bit weird. It’s beautifully written, built on sustained tension rather than shock or gore. And Shirley Jackson draws the characters perfectly.
As for short stories, my favourite has to be The Monkey’s Paw by W W Jacobs. A man is given a magical monkey’s paw, which will grant him three wishes – however, each wish comes with a horrible catch… This story actually feels quite clunky and dated at the beginning, and you don’t expect it to be scary. But the ending is genuinely chilling.

I’m actually working on my own ghost story – not for 26 Ghosts, just for fun. I’ve also been turning some classic ghost stories into songs – I think they might be quite fun for this year’s Halloween soiree…

When I was young, I had crushes on David Bowie (as the Goblin King in Labyrinth) and Richard O’Brien from The Crystal Maze. My tastes were quite niche.