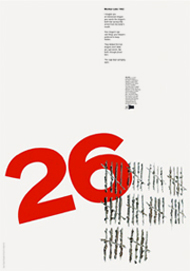 There’s PEN – the world’s oldest human rights organisation, the most prestigious group for writers worldwide, founded in 1921 by John Galsworthy and since then involving just about every great writer you can think of.

And here’s 26 – a thoroughly nice group of writers, mainly working in the business world, not household names, first coming together very informally about seven years ago.

So it’s extraordinary that for the last couple of years 26 has been a valued partner to International PEN. We’ve found lots of ways to help them because we really believe in what they do, and it’s become a creative collaboration between our two organisations. First we helped them to launch and establish the Free the Word festival as a celebration of world literature (we even named it and it’s now in its third year and spreading to other countries). Then we ran a project called 26 Exchanges that was part of last year’s London Design Festival, about understanding writing from other cultures and languages. Now we’ve been campaigning for the last two months for Writers in Prison, initiating and running the 26:50 project that has involved so many 26 members.

But there’s been even more, just off the radar. A couple of years ago I introduced Harry Pearce, graphic design partner at Pentagram and honorary 26 member, to the executive director of International PEN. Since then we’ve been working our way towards a new visual identity for International PEN. Believe me, a tough challenge, enormously complex because there are more than 140 PEN centres worldwide. But Harry has come up with something brilliant that was agreed by the PEN Board this week. It will be launched in a month or two, and I think it’s one of the cleverest and most beautiful identities I’ve ever seen.

Alongside this, on behalf of 26, Elise Valmorbida and I have been working pro bono on the verbal identity. Can you imagine? Helping PEN to use words more effectively. Well, that was also agreed this week.

In a mood of celebration perhaps, Harry and I decided that the 26:50 project deserved its own poster. So Harry designed it, persuaded the very helpful Generation Press to print it, and now we have copies available for 26:50 participants. It features my fifty words about Mochtar Lubis, the Indonesian writer PEN campaigned for in 1962 when he was imprisoned. In this poster Mochtar Lubis has to stand for all the brave fifty writers in the 26:50 project.

Get in touch if you’d like a poster. johnsimmons@blueyonder.co.uk

We all know the power of writing.

You can see that 26 has power too.