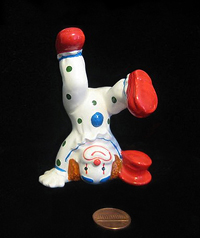 An interesting experiment is taking place to measure the commercial power of the written word. Significant Objects is a US-based project that exposes 100 writers to the most ruthless commercial arena of all: eBay.

Each has been assigned a near-worthless object bought from a junk shop and asked to write a story about it. Invested with this new fiction, the object should – according to the project’s hypothesis – gain not only subjective, but objective, value. So far, 64 items have been sold for $2,023.96, from an original price of $84.48: a ‘significance premium’ of 2,295%.

As the first UK writer to take part in the project, I feel a certain weight of national pride on my shoulders. Bidding on my object (a ceramic clown named Kenny) closes on Friday 16 October 2009 – feel free to join in.

In the meantime, I spoke to project curator Rob Walker about the thinking behind the project.

Where did you get the idea?

A few years ago, I broke a coffee cup. I was very sad about breaking the cup, even though, I realized, it was basically worthless in a free-market sense. It was valuable to me because of its narrative, as it were. It was something I’d bought on a trip to Baltimore, long ago, with the woman I later married. This got me thinking about stories and value – and about whether narrative value could simply be invented.

Later I heard about Joshua Glenn’s book, Taking Things Seriously, in which he got various writers to contribute essays on objects that were valuable to them. We got in touch and he was interested in the “invented narrative” angle, and we traded ideas for a bit and finally launched Significant Objects.

What have been the highlights for you so far?

Well it’s obviously been pretty exciting to see what people will pay – so you know, an object going for $192 was a highlight. But probably the real answer is just seeing how writers have embraced the project and the kinds of ideas they’ve come up with. It’s a thrill to get something from, say Ben Katchor, or Myla Goldberg, or Colson Whitehead, but it’s even more exciting to be astounded over and over with the creativity of their ideas.

To what extent is it a playful exercise or a serious experiment?

What do you think it says about the commercial power of story-telling?

I don’t think there’s any question that narrative and value are intertwined. All we’re doing is putting that idea out there in a different way, and adding a few layers – by drawing attention to invented narrative, by indirectly creating a whole other narrative that has to do with the project itself. People (buyers and writers and readers) want to participate in Significant Objects because it is, itself, a great story.

Are there any plans to extend the project further?

Yes. But I can’t say anything about that at the moment.