The past is a foreign country 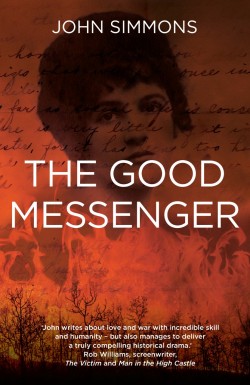 John Simmons’ latest novel, The Good Messenger reminded me of The Go-Between by LP Hartley, who wrote one of my favourite quotations, cited at the beginning of John’s book.

“The past is a foreign country. They do things differently there.”

It is a thrilling mystery from another time and a different England when the First World War changed families, relationships and society forever. It’s a poignant story of a young man’s journey to understand who he is and what he loves in a world where a childhood decision impacts his own life and those around him in ways he could never have imagined.

The historical drama tells the story of Tom Shepherd who during a stay at a country house, Hardinge Hall, in 1912 becomes an innocent messenger and witness of a secret love affair. Fast forward to 1927, when the First World War has changed everything. Tom is back in London working as a junior reporter searching for the big story that will make him. When he starts investigating a story near Hardinge Hall, the discovery of a baby’s bones in the woods nearby lead him back to the family he once stayed with as a child…

As you might expect from John Simmons, there’s some beautiful writing in the novel. As a young boy, Tom watches dusk falling from his bed. “The red sun was nearly out of sight behind the trees and the spaces between the trees were thickening with darkness. Minute by minute the sky’s colours were changing until deep blue became black and stars appeared like faraway matches struck by invisible hands.”

But this is also a novel with a mystery at its heart and a plot that keeps you guessing right until the final few pages. In the beginning, the hero of the book Tom is a nine-year-old boy, transplanted away from his mother in London into an alien environment – the grand country house. He becomes an unaware accomplice to something much bigger and more important than he can ever truly understand, and John deftly shows how the traces of this responsibility impact him forever.

But this is also a love story to another time, a snapshot of England unscarred by the horrors of the First World War. And there’s a poignancy in this that all of us involved in the latest 26 Armistice project will feel deeply.

The Good Messenger is the perfect book for readers who want to recapture the evocative heady summer of The Go-Between and the story of a scarred nation from Pat Barker’s Ghost Road trilogy. It will also appeal to any Sebastian Faulks fans out there. I highly recommend it.

And despite its setting and underlying thought that we carry our history with us, The Good Messenger is also a book about hope. It’s a book that finds resolution by reconciling the past, present and future. For as John writes, “We had something before us both in the darkness of these trees and in the morning light streaming through their leaves.”

The Good Messenger by John Simmons

Enjoy a special 26% off when you buy all three of John’s novels, including free postage and packaging. For paperbacks, that’s just £6.65 per book. And for hardbacks, it’s £9.61 per book. Please email matthew@urbanepublications.com to bag your books.

John will be in conversation with screenwriter Rob Williams at the Bloomsbury Festival on Sunday 21st October. All welcome. Get your tickets here.