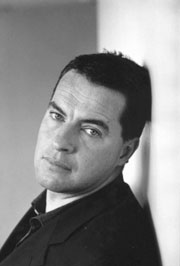 Paul Burke should start the ‘Shut Up and Get On With It School of Writing’. He got into advertising from school after telephoning Abbott Mead Vickers and asking to speak to Mr Abbott about a job as a writer. He got a job as a van driver and took it from there. Nobody told him that you weren’t supposed to do it like that.

At the October Gallery, Paul gave the 26 audience his views on writing radio ads and told us about how he got started as a novelist. Those of us who had braved the hailstorms (and decided against watching The Arsenal against Real Madrid) got a generous helping of Paul’s passionate opinions and priceless advice. He reckons that the sense of timing you get writing for radio helps to make your fiction writing flow. In Mr. Burke’s case it has also given him a brilliant comic delivery. At school in London, one of his teachers told him, “Words are like pound notes, boy. Don’t waste them”. So he doesn’t. (Or not when he’s only got 30 seconds into which they all have to fit.)

We heard some excellent radio ads, some bad ones and some excruciating ones. We learned that if you want more creative freedom to write for radio you should work in the US and Australia, definitely not the UK.

Nobody told Paul that you don’t just sit down and write a novel either. So he did. He bumped into an agent who got him a two book deal so he had to write another one. He also told us how he earned enough money to buy a Ford Capri while he was still at school but if you weren’t there and you want to know how he did it, you’re going to have to read his novel, ‘Untorn Tickets’ (ISBN 0340826150).