The 26 website now has some clever blog technology under the bonnet, which means it can publish all sorts of articles from 26 members. We’re particularly keen to feature opinion pieces that consider and dissect important issues in and around the world of business writing, and writing in general. To start us off, Tim Rich outlines his concerns about Plain English and the collapse of corporate confidence.

There’s a lot of rot talked about Plain English. Of course it’s good to counter the obfusc and pretentious with clarity and good sense, but who wants to sound plain? Who wants to sound like everyone else?

It’s probably a good thing that many public bodies invest in training to help their employees produce clear information and guidance (although the Taxpayers’ Alliance seems to disagree). What I find peculiar is that so many companies have signed up to Plain English schemes. In no other area of business is it acceptable to aspire to be just as good as your competitors. What about standing out? What about competing at the level of the word? What about being the best in your market when it comes to communicating? Have you ever seen a design brief that says ‘Please make us look exactly the same as everyone else’

Setting Plain English as the highest level of aspiration for a company is like briefing the R&D department to invent what has already been invented, the sales department to sell what people already have, the marketing department to create advertising already seen, and the human resources department to recruit mediocre employees. It’s communications as compliance rather than competitive advantage. 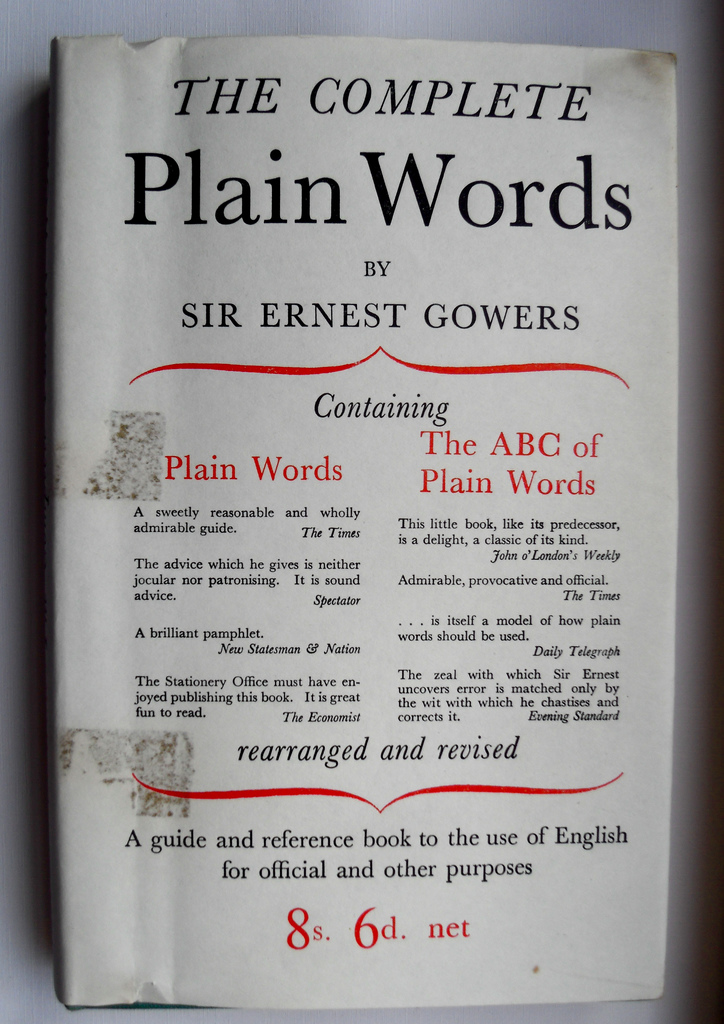 On the other hand, characterful language can be a brilliant and enduring point of difference between one business and all others. Powerful and particular words speak volumes about the personality and quality of an organisation, especially its employees. And language with character lasts longer in the reader’s mind. For these reasons alone, every business should devote a little thought to defining and enhancing its unique way of writing and speaking. But too many opt for the limiting linguistic health and safety regime of Plain English, rather than a more enterprising use of words. Plain trumps particular in these risk-averse times. I’m particularly talking about the dry version of Plain English we get today – modern Plain English – which often seems a long way from the wonderfully devilish and warm-worded writing you find within Gowers’ classic The Complete Plain Words.

To get a sense of how far Plain Englishness has penetrated into business you only have to go here. Those are the Plain English Campaign’s current corporate members (life membership at £12,000, otherwise £3,000 per year). There are lots of commercial organisations on that list. Many other businesses pay to apply the Campaign’s Crystal Mark (£500 per year) and Internet Crystal Mark. The Campaign has also introduced an Honesty Mark – ‘a free logo available to any document displaying a Crystal Mark, so long as the organisation is prepared to sign our declaration. This declaration guarantees that everything in the document is true.’ Call me churlish, but isn’t that about as useful as asking a potential liar to sign a form declaring that they’re not a liar?

I think the Plain English Campaign, for one, has done some very useful work in highlighting misuses and abuses of language by public agencies, but I have reservations about their role in business. For me, the growth of such independent approval schemes tells a rather sorry tale about the lack of purpose and confidence within contemporary corporate culture. Really, no medium-to-large company should need outsiders to come in to tell them that their communications are comprehensible, let alone require their stamp of approval to confirm that they are honest. And no company should think that honesty and clarity are anything but sound steps on the way to truly effective writing. Hasn’t business life come to something when so many organisations feel the need to outsource the judgement of communications quality and integrity?

Substantial businesses should have the expertise to know when they are communicating effectively, and the competitive drive to find unique ways to talk to the world. They should win people’s trust by being trustworthy. And they should have the self-belief needed to stamp their own mark of authority and authenticity on what they say, not someone else’s. After all, who knows its customers best – the company itself, or its Plain English consultants?