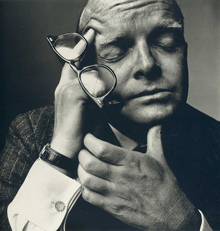 There’s nothing like a good insult. It leaves the recipient wounded, impressed and usually, speechless. Truman Capote could sock a good punch. Ditto Dorothy Parker, William Faulkner and, of course, king of the barb, Winston Churchill. See which insults whet 26ers’ appetites.

“He has never been known to use a word that might send a reader to the dictionary.” William Faulkner (about Ernest Hemingway)

A member of Parliament to Disraeli: “Sir you will either die on the gallows or of some unspeakable disease.’”

“That depends, Sir” said Disraeli, “whether I embrace your policies or your mistress.”

Truman Capote was pretty deft at dealing with a jealous drunk man’s slur. When the latter pulled out his genitals and said, “Since you’re autographing things, why don’t you autograph this?” Capote replied, “I don’t know if I can autograph it, but perhaps I can initial it.”

And the queen of put-downs Dorothy Parker quipped, “You can drag a horticulture, but you can’t make her think,” when challenged to use the word ‘horticulture’ in a sentence.

Mark Twain got graphic when it came to his dislike of Jane Austen. “Every time I read ‘Pride and Prejudice’ I want to dig her up and hit her over the skull with her own shin-bone.”

And on a more serious note, I like Gandhi’s reply to a reporter’s question, “What do you think of western civilization?” “I think it would be a good idea.”

I love Walter Kerr’s really dismissive: “He had delusions of adequacy.” Obviously I’ve stolen that a few times.

Don’t know if this counts as an insult, but I’ve always liked “Asking a working writer what he thinks about critics is like asking a lamp-post what it feels about dogs,” from Christopher Hampton. The word ‘working’ does it, doesn’t it?

But for us writers, Hemingway’s hard criticism of William Faulkner is a cautionary comment: “Poor Faulkner. Does he really think big emotions come from big words?”

“Mr. Attlee is a very modest man. Indeed he has a lot to be modest about.” Winston Churchill.

Well, this selection of Churchill’s insults includes some of my favourites:

Bessie Braddock: “Sir, you are drunk.”
Churchill: “Madam, you are ugly. In the morning, I shall be sober.”

Nancy Astor: “Sir, if you were my husband, I would give you poison.”
Churchill: “If I were your husband I would take it.”

“You can always count on Americans to do the right thing – after they’ve tried everything else.”