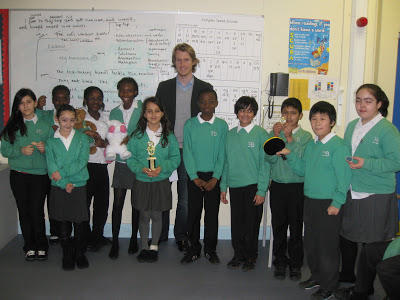 Of course they do. They’re children.

Last week, I spent five mornings in Hazelbury Junior School in Edmonton, giving some creative writing workshops to fourteen ten-year-olds. It was good. No, that’s not right: look for a better adjective, or, better still, flip the sentence into a verb sentence, give it action, decorate it in different verbs, look for some alliteration, or some assonance, and paint a picture for the reader…

The children threw out the rules, played with sentences. Chopped some. Ran some on and on and on, into other sentences. They rhymed like lives and time depended on every line. They sketched beautiful images in words, they learned to move their readers, they learned about the rule of three. Some spoke with confidence from Monday. Others learned from each other.

They fell for freight-train sentences, but loved stopping them with one-word sentences. Or trying something punchy. For effect. To engage their reader.

They told stories in a semi-circle, tripped each other’s tongues with spoken word exercises. They learned to stretch their vocabulary, to always look for a better verb, a better adjective, or a better way of saying the same thing.

They found that writing The wind whipped through the window, bringing buckets of rain into the crumbling church sounded much better than The weather was bad outside the church.

They turned a newspaper article about a beetle that lives in its own dung into a paragraph of fiction, then into a long poem, then into a haiku. Then they edited that haiku. And most went home and wrote another haiku and sprinted up to me the next morning and thrust it into my face.

As a final challenge, I asked the children to write 62 words about a treasure – something that means the world to them. In a week, I’ll publish these pieces on the 26 Treasures website. Because each piece is good enough. Because each child listened, engaged, had fun and wrote some great stuff. Because, I found out last week, children have imaginations that go further than many adults can understand.

I’ll give more workshops. Whenever I get the opportunity. Any writers out there reading this, I implore you to do the same. The reward is bigger than you’ll realise.

Here are some of the children’s responses to the challenges I set during the week (with only tiny edits from me):

Turn this newspaper article into a (paragraph of fiction, then a) poem…

Walking without making a sound,
The Pot beetle is once again
just one beetle roaming around,
living in his pooey house for another day.
Eating, hiding,
doing everything.
Living his life without a care.

I am a beetle
Looking down at my kingdom
Sitting on a leaf
How will I get there
If I am so terrified?
I have to be BRAVE

The hazel pot beetle died
everyone in the world cried
And sighed
The beetles died…
But they lied
Because they were alive
Hiding in his dung house.

We’re beetles, yes, it’s true
We’re not extinct
It must be you, being stupid
As usual, you little savages,
Drinking Coke and riding in carriages

Turn your beetle poem into a haiku…

A homeless beetle
looking at me wanting help
Oh what should I do?

Just me a beetle
Living in my own poo world
Roaming around, free

When I got there she was already dead. Blood oozing from her side, seeping between her side and the spear that killed her. I had a flashback about yesterday. We were fighting for anything/nothing. I stormed out. I shouldn’t have left her there. I was being selfish and now she’s dead. It’s all my fault. And my last words to her were: “I hate you! I wish you were dead.” And now she is.

not sure who wrote this

Freight-train sentence, punchy sentence and one-word about a river

It was freezing. I was shivering.

The river flowed and turned and bended until it came to the waterfall.

Let the river swirl freely into the lake.

The river curved and bended and meandered perfectly.

A rock was blocking it.

It flowed and flowed and cascaded down a luscious green hill and burst its banks. Splish. The river flooded.

The river is a flow of happiness and will only stop at the very end, and is a long stream and can carry you off in an instant, and is a vibrant colour of blue. The river continues. Forever.

Any combination of freight-train, punchy and one-word…

It was pouring and freezing and snowing and blowing and flashing and destroying everything in sight. It was the end.

not sure who wrote this

I ran and ran and said I’d never turn back but I stopped and realised that I was running for myself. I lay there and cried.