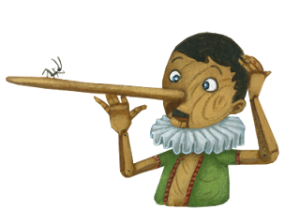 Let your imagination run wild with our new project. Be as deceptive, dishonest, evasive or economical with the truth as you fancy. 26 Lies is about to pick your writing brains and stuff them in its pocket

Human beings have lied to each other from the beginning of time. Lies come in many forms – in everyday conversation, in politics, journalism, advertising, in all forms of human relationship. And of course lies are at the heart of so many great stories.

We’re collecting quotations. These are either lies themselves: “I did not have sexual relations with that woman” or reflections on the nature of lies: “Oh! What a tangled web we weave, when first we practise to deceive!”, and we’ll match 26 of them – whoppers or pearls of wisdom – to 26 writers. Each writer will then respond to the quotation in any form they choose. And they’ll work with an illustrator or other artist.

You might want to write a short story, a poem, or offer a new perspective on a well-known lie. Or do something entirely different. One thing you definitely don’t have to do is tell the truth.

How it will work

26 Lies was announced this month at Wordstock, having first emerged as an idea that won the popular vote for new projects at the event last year. We’re recruiting writers now and will draw names and quotations out of the hat at The Four Thieves pub in London on Tuesday 17 November at 6:30pm.

Writers will then have a few weeks to find an artist-partner. This could, for example, be an illustrator, artist, photographer, filmmaker or audio recordist. We may be able to help with partners as we already have some interest from Letter Exchange, the association of lettering artists. Failing that, there’s nothing stopping you taking a snap on your smartphone.

Writing in earnest will take place between mid-December and mid-February. And we’ll aim to start publishing in March, leading up to April Fool’s Day.

As for the end result, there’ll be a website, and we’re still working on ideas so please let us know if you have any thoughts.

How to take part

If you’re interested, email Wendy Jones at wendy.jones@sacksjones.co.uk and cc Andy Hayes at andyinfinity@hotmail.com as soon as possible and no later than 9 November.

If you filled in one of the 26 Lies forms at Wordstock, then we’ve already got your details. But please drop Wendy and Andy an email anyway to confirm you’re still interested.

And, of course, you don’t need to be based in London. If you can get to the pub launch in November to witness the draw, that’s great. But if not, you will just have to trust us to be honest…

One other thing – we need some help with editing. We usually allocate one editor to four or five writers. So if you’d like to do that, rather than writing yourself, please let Wendy and Andy know.